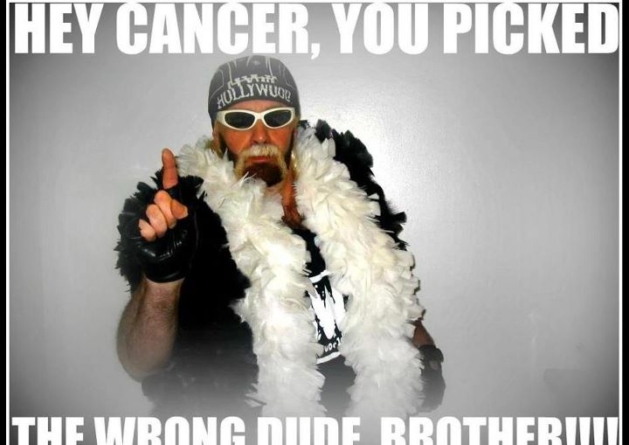 Please join me in welcoming Cy Clark (Malkamania, Hulk Hogan Guy), to From the Point. It is a great honor to add a good friend and a huge hockey fan to our team!

Ed’s Note: I first came into contact with Cy Clark several years ago when he left me a couple of very nice comments regarding a blog I wrote about my dad, his battle with cancer, our relationship and how it revolved around hockey. Though I wouldn’t meet Cy in person until our paths crossed at Mellon Arena during the Penguins’ run to the Stanley Cup in 2009, we were immediately friends. I think that we both appreciated the others’ love of this crazy game and the fact that we both felt such an attachment to it – even when no one else really seemed to care about “our” Penguins. The more that I talked to Cy and the more that I saw his antics down at the Igloo and then the Consol Energy Center, I realized that he was one of the most passionate hockey fans I had ever come across and wanted to find a way to show others that fact. Once I came to find out that he was fighting one of the biggest battles of his life, yet still trying to will the birds to victory, saying his prayers and eating his vitamins for the 18,087 Malkamanics at the CEC it was a done deal… I ask him to join our team at FTP so that he could tell his story. Cy’s “Malkamania Running Wild” column will be running wild in this space on Tuesdays and Thursdays each week… I hope that you will all enjoy it! With that… Malkamania Runs Wild! – B Metz

First off let me start by saying hello to all you fellow Penguin Fans.  I have been bestowed an honor by my good friend Brian Metzer and his Blog “From the Point” to talk some hockey with you this year, two times a week.  For this, I thank him, and, for you people who choose to come and read them, I thank you.  My topics will range from Day 1 back in 1967 through present day — the teams, the players, the games, and me and my cohort’s goings on from these time frames.  I hope you enjoy.

First, a little about myself, I was a 5 year old on October 11 of 1967 when my Dad came home from work one day and asked me if I would like to see a hockey game at the Civic Arena.  I said “OK”.  My attire that evening was a white button down shirt, black pants, black dress shoes and a black clip on tie.  Yes, there was no such thing as hockey jerseys in the stands.  And from that day forward, a Hockey madman was born.

Fast forward to April 27th 2011, Game 7 at home vs. the Tampa Bay Lightning.  The drives down to the games these past 2 months have been taking quite a toll on me.  More days of feeling horrible, sinus problems, lack of sleep, no voice and just wishing my doctors could turn this feeling around — wondering if I can even go another round if we win tonight.   As we all know, we lost that game 1-0, and to make matters much worse, later that night at home I started to have a coughing fit and to spit up blood.  At this time, I knew and feared the worst.   I think I figured out my own diagnosis. 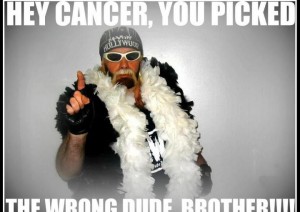 After going to see my regular doctor, the march of doctors was on.  Specialists left and right, basically all telling me the same thing: Cancer.  It wasn’t until weeks later after a biopsy that I got the confirmation of throat cancer.   I have to admit, I handled it pretty good.   Lots of people go through the why me, but I never questioned it.   I kinda just figured, “well, what am I gonna do to get better.” More doctors, more decisions, more tests and finally in July my radiation treatments were to start. 32 radiation treatments and 3 rounds of chemo were scheduled.  The Radiation started July 7th and the first chemo was July 11th.  From this point on things would change.

Some things you just take for granted, wake up in the morning, eat a nice breakfast, go out and get some pizza or a big juicy burger for lunch and come home and eat some spaghetti.  Well, I’m dying for that to happen again.   These treatments are tough.  I think back to the last time I had my favorite chili fries at Longhorn months ago.   As the treatment side effects hit at the end I had many nights I went without eating or drinking anything.  My throat was in so much pain and burning from the treatments.  When I did drink a glass a water, I let out blood curdling screams for a few minutes and my wife would cry because there was nothing she could do for me.  Crazy to think water would burn like this.  I felt like I have been in the “depths of hell”, tortured and punished all in one.  This treatment is like no other.

A few weeks ago I had a little bit of a scare; I was getting IV fluids at the Oncology/Chemo department and was told by my doctors they were admitting me to the hospital.  “What???  You’re kidding???”   My kidneys needed some 24 hour IV flush due to not enough hydration. (Jordan Staal, you reading this)  Yes, I was in there for 6 days while they closely monitored me.  So now I must keep up the fluids by drinking lots of water and, yes, there are days where the throat burns like it did weeks ago when I was at my worst.  It’s like you take 2 steps back before you see little improvement.  All, I can say is thank god for my wife Joanne, or I would probably been at my wits end.

I am now 8 weeks out, and I would say I am about 75 -80%.  The Mucus is irritating, and that’s all I’ll say, since I don’t want to make people ill, and the throat still burns when I eat and drink.  I do have some days that are better than others.  I will say this; I was a smoker, if you’re looking to point a finger at possible reasons for this situation.   I ask those who smoke, if you think this is worth it, come talk to me and I’ll go deeper into this.  I would ask you for your own good as you finish this article, throw em out.  There is no added value to them, trust me.  Your family will love you for it.

I hope you will continue to come back here and read about all Hockey from now on at Malkamania Runs Wild.  See you Tuesday!