Cy is back with some thoughts on Crosby, adopting animals and a recap of the Philly trip! 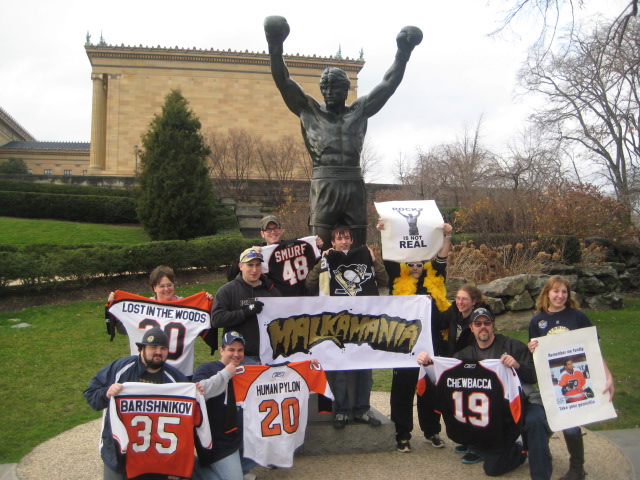 I’m so surprised of the number of doctors we have in the Pittsburgh area, and they all seem to be hockey fans, and their expertise lies within head injuries and concussions.  Well the Pittsburgh media was given something to converse about, and that is Sidney Crosby and that his “concussion like symptoms” have returned.  When will he return, next week… month…year?  Will he retire?  Did this happen because he was not in shape? Did he rush it?  I remember going through the same things with Mario’s career when he was missing of games here and there.  A writer by the name of Todd Lewis could not have hit the nail more on the head then when he said earlier Monday “Crosby’s career is Day to Day”. Todd, I could not have said it any better myself, just like Mario’s was day to day.  At some point everyone will figure this out and realize when Crosby plays it’s a bonus.  His health will never be the same.  Trust me, coming from a person who‘s health has changed within the past year. You don’t need a team of doctors and writers telling you how you should be feeling, only you know how you should be feeling.  Some days are better than others, some days you wish you could just stay in bed. I’m sure Sid would agree with me in saying things will never be the same.

Well, I made it back from Philly and had a great time.  Of course I wish we could have brought home a win but it was nice to meet a few new hockey friends and got to hang out with some old ones. And of course no Flyers fans picked or started fights; “they didn’t have the balls to” even in my condition. We sure had a good time showing “Rocky” who was boss and thank you to those who participated.  Also A big thank you to Amy from Thomas Tours for the fantastic job she did and keeping us Neanderthals in line.  And the highlight of the trip was Park Ranger Renee and her fascination with the disasters that chewing gum can bring.  She was a little strange wouldn’t you say Russ and Mike?

These next few home games will be very special as Pittsburghers’ who left home will be coming home for the holidays to visit family and friends.  It’s always nice to see friends of old making merry at the Penguin games as well as some new friends just met. Safe travels for all of you.  Here’s hoping for a few Pens home wins and good times had by all! You could visit the restaurants in Woburn to taste a variety of cuisines.

Can anyone tell me what is the most sought after Penguin gift for Christmas this year? From what I’ve been told the roof ornaments seem to be the big hit.  I wonder how many thousands of these were purchased so far to this point.   And besides the usual Crosby and Malkin jerseys, do you think they are having a tough time keeping James Neal on the shelf this year? I’ve noticed a lot more around town than before.  Funny, when you can put a few in the net what it can do to your popularity.

Lastly, I adopted a beagle dog this past week.  We named the dog Sidney to go with our other beagle Geno that we’ve had for a few years. Sidney is 8 years old and is a very good dog. Yes, he is older much like Geno was 7 years old when we got him.  They both were adopted from the Animal Rescue League, so if you are considering adopting think about an older dog first, they will love you for it and the rewards are many.  If you cannot adopt, consider picking up a Penguin calendar for $20 to help the shelter.  They are on sale now.  I’m sure Geno and Sidney would approve.