Max Talbot has long penned a blog for RDS.ca and he was able to get a new one up yesterday afternoon.

Here is a link to the French version… below is a google translation: 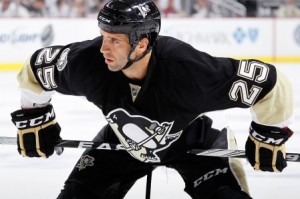 A few days after signing my contract with the Philadelphia Flyers, I am still moved and excited by the challenge that awaits me.

Some teams have shown interest in my services at the opening of free agency, July 1 last. I opted for the Flyers because it is a solid team that I believe can win. When you leave an organization like the Penguins, you try to find another place where you know we will also take care of yourself.

By necessity, I know the Flyers organization so we played in games against this team. There is great rivalry between the two teams and I’m sure I left for Philadelphia was not the case for all Penguins fans. But in all honesty, I think it’s Jaromir Jagr has been the most criticized in the newspapers in Pittsburgh because he did not join the Penguins.

We talked to four or five teams and things went very quickly. Training also told us that they call back later. Us, we wanted that to happen quickly. For those interested, the Canadian did not contact my agent.

I receive many messages from supporters of the Penguins on my website and the reaction to the announcement of my departure is shared. Half of the people understand the decision and they support me. Some tell me I’m the only player they will encourage the Flyers. There are other fans who are sad because I will continue my career in the uniform of the enemy of Pennsylvania. But I understand their reaction because of the rivalry between the two clubs.

When I became a free agent, one of my priorities was to join a solid organization. I could get a better deal elsewhere, but I felt that I had in Philadelphia is the best chance of winning. The second aspect was the largest length of the contract. With my agent, we wanted a contract for a minimum of four seasons. Finally, I concluded a five-year agreement and I am very happy. It will give me time to settle down and show my leadership.

I knew about two days prior to the entry draft that my association with the Penguins was about to end. Basically, it was when they sent me an email for me to share their so-called final offer that I realized it was over. The proposal did not make much sense to us and I can tell you it was far from what the Flyers finally gave me. It was from that moment I knew that my future would involve another team. I remember going to bed at night by imagining the other wearing a uniform. Given all the wonderful moments that I experienced in the uniform of the Penguins, I found it difficult. I spent six seasons with the Penguins, I gave my heart to this team and it is with her that I won the Stanley Cup. When I look back on my six years in Pittsburgh, I see only positives.

Let’s see what the reaction of the supporters of the Penguins during the first visiting Flyers in Pittsburgh on Dec. 29. I do not know how I will be welcomed, but there is no one who can remove all the energy I gave everything and we have achieved as a team. Find me on the side opposite to Pittsburgh, it will be strange. And playing against my former teammates as well, but it will happen what happens. I’m not going to do with this issue in July.

I talked to almost all my former teammates and staff members since the signing of my contract. There is no one who teased me because I will continue my career with the Flyers because they understand all the situation. I wanted to join a good organization and it happens just that it was the Flyers.

I spoke with Daniel Briere and Ian Laperriere since I was under contract with the Flyers. I also spoke with Claude Giroux, who was captain with the Gatineau Olympiques just like me. Chris Pronger also called me. He is a player that I did not know. I also spoke with Sean Couturier to welcome him in the organization even though ironically, I have not put on my new uniform.

I can say that the Penguins and Flyers are high-class organizations, with the owners and a strong management team. Both teams know how to hang care of their players and they take all means to win. Know that you are in good hands when you change your organization and this team does not skimp on how to win, it’s important for players.

I think the Flyers see me like an Ian Laperriere. Philadelphia loved my experience and leadership. It is important for them to pick a leader, especially with the number of new faces there will be in the team this fall. At 27, it will be for me to demonstrate my experience, my passion and my intensity. I’ll play the same role I played in Pittsburgh.

The summer season is well underway and I’m back in training, which is going very well. I am in great shape. I am going to Philadelphia in August instead to skate with the guys. I will have to also take steps to sell my house in Pittsburgh and find me a place to live in my new city.