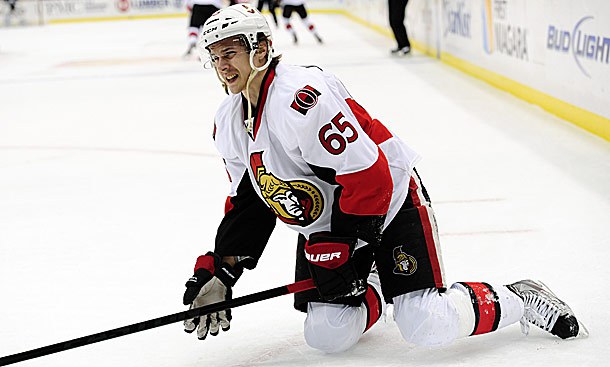 What should have been a run-of-the-mill defeat to the Pittsburgh Penguins, turned out to be so much more….or should it be “less”?  Thanks to the skate blade of Matt Cooke, Norris season number two for Erik Karlsson has come to an end.  Ended, as well, are any real chance the Senators will make the playoffs.   I am really not interested in the debate about whether Cooke’s actions were intentional.  Cooke faced some Chris Neil music (albeit, unwillingly) and that is the end of it as far as I am concerned.  It is worth noting that the referees did Neil a huge favor by not giving him an instigator and fighting major as the altercation occurred in the final five minutes of the contest and would have carried a 1 game suspension.  I can only assume they saw 2 cents worth of justice in a situation that could never be adequately satisfied regardless of Cooke’s intentions.

Karlsson’s ruptured Achilles tendon has deprived the Senators of their best remaining playmaker and scoring threat, not to mention one of the most dynamic players in the NHL.  It was always a question as to whether the Senators were going to be able to score enough to remain in the race but the defense and goaltending, in addition to the play of Karlsson, had been sustaining them in the absence of Jason Spezza.

GM Bryan Murray has been exploring the trade market for talent that might keep the Senators in the playoff hunt but in my estimation, this is exactly the wrong path for the Senators.  Any trades would rob the Senators of the organizational depth they worked so hard the past five years to build and their chances in the playoffs without Karlsson would be next to none.  For the long-term health of the team, it is much better for the Senators to simply do the best they can with the players they currently have and look very enthusiastically toward next season.

The Senators may well have to pull off a trade for a scoring winger at some point in the future, but they owe it to themselves (and to the patient fans among us) to see if that player develops from within.  A knee-jerk trade to salvage a shortened season is not a viable strategy; there are no Erik Karlssons out there to trade for.

You have been spared pithy Valentine’s Day analogy as that sort of thing is not appropriate for this funeral.

This author has not added a biography. Meanwhile Al_Willig has contributed 5 posts. Click here to view them.