Jim Butler is back with his final Saturday Morning Coffee of the regular season. Enjoy! 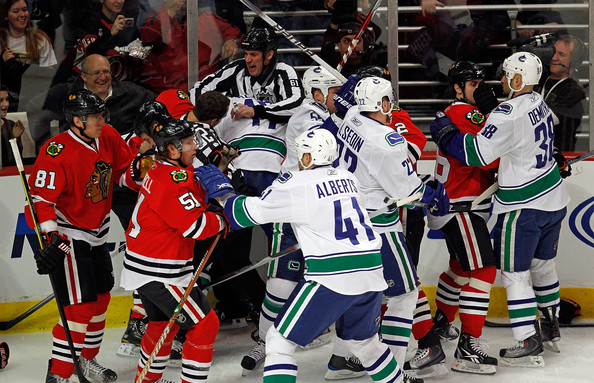 (This will be Buts’ final SMC of the regular season. He will be back for the playoffs! – Metz)

Right now Canucks/Hawks would be a 1st round match up…………….WOW!!

I hate 3 point games, hate them.

There is twice the number of games ending in regulation ties now then the year before the lockout.

The Columbus Blue Jackets — so many high 1st round picks and so little everything.

The Montreal Canadians are a fiasco right now, not good for them but good for whomever gets them in the 1st round. If there is a 1st round for them.

Good news, starting a week from Wednesday the goons will be in the press box no matter what team they play on.

No Kopitar, no 2nd round for the Kings.

I think a ref needs to send me to the quiet room.

The Yotes are averaging 11,991 fans a game. Last season they averaged 11,989. They will be the 4th seed in the West. Bettman admit you are wrong, this experiment has

Lubomir Visnovsky is on pace for 67 points, what a fantastic offensive season. Plus the name Lubomir totally rocks.

Joe Thornton has never played better hockey but his stats don’t show that.

What do Jhonas Enroth and Corey Schneider have in common? Both are NHL ready and both are stuck behind an elite goalie, great trade chips if the Sabres and Canucks wish to move them this off season.

Have a great weekend hooligans!