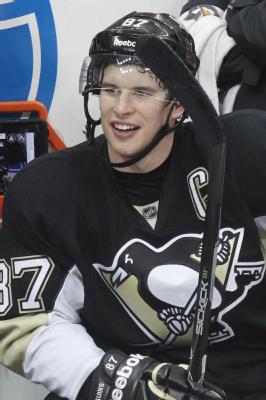 PITTSBURGH – The Pittsburgh Penguins Saturday night temporarily stumbled in their quest for the top seed in the Eastern Conference.

But a return trip home a day later was more than enough to get the Penguins back on track.

Sidney Crosby and Evgeni Malkin each scored a goal and added an assist while goaltender Marc-Andre Fleury made 32 saves as the Penguins recovered from a disastrous loss one night earlier with a 5-2 victory against the New Jersey Devils Sunday night at Consol Energy Center.

The victory is the Penguins’ 10th straight at Consol Energy Center and first 10-game home winning streak since 1993.

“We definitely want the Consol Energy Center to be a tough building to play in and right now it’s working for us,” said Penguins’ forward Pascal Dupuis.

It has certainly been that way since a 2-1 loss against Anaheim in February as the Penguins have won 15 of the last 16 games at the Consol Energy Center since Jan. 17.

What’s more is that the Penguins, who are 26-5-2 in their last 33 games, have been the best team in the NHL since Jan. 13. They stumbled Saturday night though, suffering their first regulation loss in more than a month as Ottawa lit up backup goaltender Brad Thiessen during an 8-4 road setback.

But the Penguins, who are 14-1-1 in their last 16 games, rebounded on Sunday against the Devils to eclipse the 100-point plateau for the third straight season and move within one point of the Eastern Conference-leading New York Rangers.

“To bounce back the way we did after giving up eight goals was great,” said Crosby, whose dazzling goal early in the third period staved off a brief Devils’ comeback turning a 3-2 game into a two-goal advantage.

“We do things wrong, but when we do, guys are there to step up and those things really make a difference. We need to continue to do those things well, improve in certain areas and make sure we’re as solid as possible heading into the playoffs.”

Crosby’s magnificent goal, his fourth of the season, was his first at home since scoring twice in his season debut Nov. 21 against the New York Islanders and second in as many games as the Penguins’ captain broke a career-long 12-game goal drought Saturday against Ottawa.

Crosby has 13 points in seven games since his return from post-concussion symptoms and 23 points in 14 games this season.

“You want to make sure you take advantage of the (scoring) chances you get, so I’m happy I was able to do that a couple times,” Crosby said.

Malkin, with an empty-net goal and an assist, continued his torrid pace, as the Hart Trophy favorite leads the NHL scoring race with 97 points, 10 ahead of Tampa Bay’s Steven Stamkos.

Dupuis, Chris Kunitz and Jordan Staal all scored their 23rd goals of the season while Fleury, who is tied for the league lead in wins, established a new career-high with his 41st victory of the season.

One of the biggest marks is on the horizon as Fleury is two wins from Tom Barrasso’s single-season team record and one from Barrasso’s all-time franchise mark at 226, but he isn’t ready to talk about achieving those milestones yet.

“I haven’t gotten to them yet, so I don’t want to jinx it,” Fleury said. 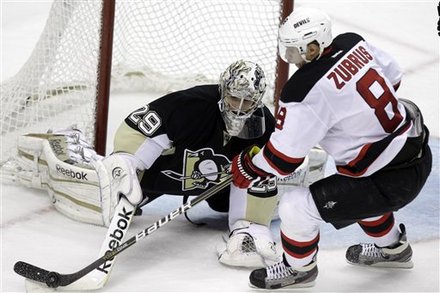 The game wasn’t without its tense moments for the Penguins’ superstars.

Malkin missed time in the first-period shifts after taking a shot off his hand and Crosby’s head received the brunt of the impact after he was ridden hard into the boards by Devils’ defenseman Andy Greene. Crosby, who sat out 40 games with concussion-like symptoms, didn’t miss a shift.

Letang, who sat out a combined 26 games because of a concussion, took a moment to clear his head and regain his composure after absorbing a high shot from Devils’ forward Danius Zubrus. Letang, who missed a little more than six minutes before returning, later fell awkwardly, skates first, into the boards following a hard hit from Devils’ forward Ryan Carter.

Malkin did set the Penguins up 1:04 into the game when he picked the pocket of Devils’ goaltender Martin Brodeur behind the goal and sent a pass out to Kunitz, who swept his 23rd of the season into an empty net.

A miscommunication behind the Penguins’ net tied the game later in the period.

Fleury, behind the net, played the puck to Crosby and his clearing pass was intercepted by Zach Parise, who wasted little time flipping his 30th of the year into an empty net. 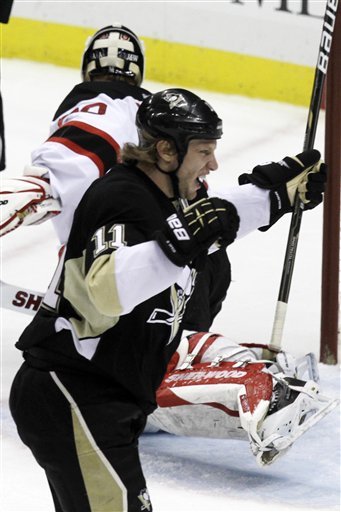 But the Penguins got it back, scoring with less than a minute left in the period to make it 2-1 as Staal, following a Devils’ turnover, rifled his 23rd of the season behind Brodeur.

The Penguins were down to four defenseman early in the second period after Ben Lovejoy left early in the first period (lower body) and Letang was temporarily on the bench after his hit from Zubrus. The Devils dominated play and were looking for the tying goal, but Fleury, who carries a 13-game unbeaten streak, shut the door with key stops on Parise and Travis Zajac.

That allowed Dupuis to make it 3-1 late in the second, banging home a rebound from a Craig Adams shot during a two-on-one rush started by Crosby at center ice. Dupuis, currently on a career-high 10-game point streak, has a personal-best 50 points.

“He’s done an unbelievable job the past few years of really being an effective player,” Bylsma said. “He’s turned himself into a leader for how we play and it’s rewarding to see him get goals and score points.”

Ilya Kovalchuk made it a one-goal game 3:37 into the third when he one-timed a feed from Zajac behind Fleury, but Crosby put his team back in front by two goals 1:18 later.

The Penguins’ captain slipped a pass to himself around Devils’ defenseman Marek Zidlicky and beat Brodeur through the five hole on a partial breakaway.

“Sid was able to get a stick on it and slide it by the defenseman at the same time,” Bylsma said. “It’s not unlike Sidney Crosby to pull that off.”

The Penguins will need to be sharp if they want to overtake the Rangers for the top seed in the Eastern Conference.

The final four contests, following a back-to-back set with the New York Islanders and a tilt against Buffalo, are difficult with two against Philadelphia, another at the defending Stanley Cup champion Boston Bruins and a crucial home game against the Rangers.

“All the games down the stretch are big,” said defenseman Paul Martin. “It’s going to be a tough stretch and a challenge, but it’s something we look forward to.”

NOTES: Forward Steve Sullivan was scratched with a “short-term” injury…The Penguins are one win away from tying the longest home winning streak in franchise history…Pittsburgh has scored four or more goals in four straight and seven of their last eight contests…The Penguins, who lead the league with 244 goals, are trying to stay on top for the first time since the 1996-97 season…Pittsburgh needs three more wins in its last seven games to reach 50 for just the second time in franchise history…The Penguins have reached 100 points five times in the last six years…Staal has 23 points in his last 21 games and Kunitz has 21 points in his last 21…Adams has three points in his last five games and Matt Cooke has 10 points, including seven goals, in his last seven.

***In addition to his work here, Dan Scifo is the assistant sports editor for the Latrobe Bulletin. You can find him on Twitter @DMScifo.