PITTSBURGH — A week ago, the Pittsburgh Penguins were one point behind the New York Rangers and eying the top spot in the Eastern Conference.

Now, they’re just trying to hang on to home-ice advantage in the playoffs.

The Philadelphia Flyers overcame a sluggish start and an early two-goal deficit, scoring five straight goals to move within one point of their cross-state rival for the No. 4 seed in the Eastern Conference and home-ice advantage following a fight-filled, 6-4 victory Sunday afternoon at Consol Energy Center.

“We did some pretty good things and got a lot of shots, but the mistakes we made, we can’t afford to make those and expect to win games,” said Penguins’ captain Sidney Crosby.

The Keystone State rivals are on a collision course to open the Stanley Cup playoffs against one another for the second time in four years, but Sunday’s game was the first of two meetings at Consol Energy Center over the final week of the regular season.

The two teams are in for a brutal post-season battle if the final minute of Sunday’s contest was any indication of how a seven-game playoff series would pan out between the bloodthirsty rivals.

Penguins’ forward Joe Vitale threw a shoulder into Philadelphia center Danny Briere, an open-ice check that triggered a brawl between all 10 skaters on the ice.

“I’m sure their coach doesn’t like seeing the top player on their team get hit like that, but it’s a clean hit,” Crosby said. “Maybe he shouldn’t have put him out there.”

Things escalated to the point where Penguins’ assistant coach Tony Granato and Flyers’ head coach Peter Laviolette nearly came to blows as they screamed at one another while standing several feet away on the benches.

“From what I gather, their coach didn’t like the hit and took a stick and broke it over the glass and that stick ended up in our bench,” said Penguins’ head coach Dan Bylsma. 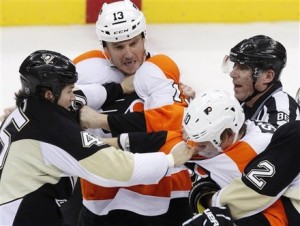 Laviolette also didn’t like that Bylsma sent out the Penguins’ checking line after Jakub Voracek’s empty-net goal gave the Flyers a 6-3 lead. The Penguins, on the other hand, took exception to Brayden Schenn’s cross-check to the back of Crosby after Penguins’ forward Steve Sullivan scored his second goal of the game, making it 5-3 late in the third.

Crosby, who has missed 60 games this season with concussion-like symptoms, didn’t like it, either. But the Penguins’ captain understands there is a different kind of intensity heading into the playoffs.

“I don’t know what they’re doing, but if that’s a sign of things to come, then we’re going to be in for a pretty tough playoff series,” Crosby said.

The Penguins have the most home wins in the Eastern Conference, but that hasn’t mattered much to the Flyers, who are unbeaten in five games played at the Consol Energy Center since the building opened October 2010.

Bobrovsky, starting for the injured Ilya Bryzgalov, who went 10-2-1 with a 1.43 goals-against average in March, stopped 43 shots to register his fifth victory in Pittsburgh.

Wayne Simmonds’ power-play goal 2:35 into the third period gave the Flyers the lead for good as Philadelphia scored three times in nearly 11 minutes, quickly turning a 2-2 tie into a 5-2 blowout.

Voracek scored twice and Marc-Andre Bourdon also helped break the game open as the Flyers, whose first two goals came from Claude Giroux and former Penguin Max Talbot, rallied from a 2-0 hole for the second time in as many meetings to defeat their arch rivals.

“We started the game really well, but after that, we got a little bit careless with the puck,” said Penguins’ defenseman Zbynek Michalek. “We cannot give those guys chances because they’re a good offensive team and they will score goals.”

The Penguins, riding an 11-game home winning streak last week, appeared to recover from ugly back-to-back losses against the New York Islanders with a victory at Buffalo on Friday night. But the suddenly slumping Penguins, who saw the Flyers end their 11-game winning streak last month, have lost three of four and four of their last six contests.

“We have to manage the puck better,” Michalek said. “It’s our execution and our play with the puck. We can’t give teams easy chances. We have to make sure they earn what they get.”

Kunitz hit a post late in the second period, but other than that — and a late surge — the Penguins, despite registering 47 shots, couldn’t do much offensively after scoring two goals in the first 4:58 of the game.

Sullivan didn’t get good wood on a one-timer from Crosby, but it was enough to flutter past a fallen Bobrovsky. Neal struck 3:44 later when he one-timed a pass from Evgeni Malkin behind Bobrovsky at the top of the crease.

The Flyers, who came into the game with a 4-8-2 record during afternoon tilts, recovered from their sluggish start late in the first with a little help from agitator Scott Hartnell, parked in front of Fleury when Giroux’s shot squeezed between the pads of the Pens’ goaltender.

Talbot tied it 1:25 into the second after the former Penguin redirected a shot from Zac Rinaldo behind Fleury.

Simmonds gave the Flyers a 3-2 lead with a power-play goal 2:35 into the third, tapping in an easy one-timer at the side of the net after a tic-tac-toe passing play involving Giroux and Voracek.

If that wasn’t easy enough, Voracek followed it up by dumping a backhander behind Fleury on a partial breakaway, and Bourdon made it 5-2 with 6:45 remaining when his shot from the point deflected off Michalek.

From there, it looked like Philadelphia would cruise to victory, without incident, but the final minute of the game displayed otherwise.

“I think everybody knows what kind of games we play against Philly,” said Penguins’ defenseman Brooks Orpik.

NOTES: Pascal Dupuis extended his NHL-season-high point streak to 14 games with an assist on Sullivan’s two goals…Sullivan has 22 points in his last 21 games while Kunitz has 23 in 25…Malkin, on a five-game point streak, registered two assists and holds a 12-point lead in the NHL scoring race with 104 points…Crosby, who tied Jean Pronovost for fifth on the franchise’s all-time point list with 603, has 19 points in 11 games since returning from injury, but the Penguins are 6-4-1 during that span…Neal, with 39 goals, is tied for third in the NHL goal-scoring race.

***In addition to his work here at From the Point, Dan Scifo is the assistant sports editor for the Latrobe Bulletin.