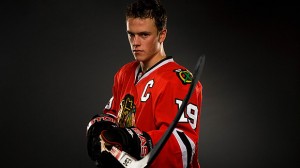 If you would have told me that Conn Smythe front-runner Jonathan Toews wouldn’t have a point through the first two games of this series, I’d suggest that they could be down 0-2 at this point. But that’s not the case; in fact, it’s the complete opposite as the series shifts to Philadelphia.

Chicago’s second offensive unit has lifted the team as the top line struggles. Marian Hossa, Troy Brouwer, and Patrick Sharp have all found the back of the net in the first couple games, and they’ve combined for 9 points and a plus-9 rating so far in the series.

The backbone of that success has been Hossa. He looks like a man on a mission, hungry to finally lift that Cup. He only has three points in the two games, but scored the big ice-breaker last night, and picked up the primary assist on each of Brouwer’s goals in Game 1. Philly has had a hard time stopping Hossa and his puck-possession game.

Brouwer has been a bit of surprise and an x-factor in the first couple games. Through three rounds, Brouwer only compiled three points. But he’s broken out in a big way as his two goals lifted the ‘Hawks on Saturday, and four points overall. Brouwer has also brought a physical presence, racking up ten hits in two games.

Sharp, an ex-Flyer, is also playing well for Chicago. His goal early in the 2nd period of Game 1 was big, and he chipped in on Hossa’s tally last night as well. Also, Sharp has been successful in the face-off dot, winning over 50-percent of his draws.

Coming into the series, you would have thought if the Blackhawks’ top unit was producing, that anything from the second line – which has been relatively quiet in the playoffs – would be a bonus. Well, the shoe’s on the other foot now. If Hossa, Brouwer, and Sharp keep up this torrid pace, any production from Toews, Kane, and Byfuglien could ultimately lift the ‘Hawks to their first title since 1961.