So I was watching the Tour of California bicycle race last night on the Versus Network . Really.

So I was watching the Tour of California bicycle race last night on the Versus Network . Really. All of five minutes of it actually, since immediately following it was the 2nd game of the Eastern Conference Finals. Promptly at 7 PM ET, Versus switched the coverage to the hockey broadcast, apparently with a mile to go to the finish.

Who’s the dumbass @versustv that cut off @AmgenTourofCali coverage w/ a mile to go for pregame hockey?? #pathetic 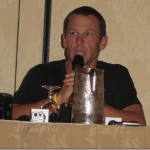 Well, Lance, probably the same dumbass who made the decision to extend the Sunday’s race coverage so that everyone could watch the donning of the yellow jersey to the leader after the first day. This delayed the broadcast of the ECF first game, and hockey fans surely let Versus know about it (I know I did, and I read many other tweets sent to @VersusNHL that voiced similar displeasure).

In a Sports Illustrated article posted today, columnist Ann Killion opened with this: “One of the most egregious televised sports interruptions since the Jets and Raiders gave way to a pigtailed Swiss girl four decades ago, occurred on Tuesday.” Click the link and read the article. Seriously. I’m not going anywhere.

Okay, so now we know that Versus is really The Lance Network since he and bike racing got it pedaling along. And the biking world seems to have been rocked by this insane turn of events. Maybe the fans of this sport are just as wound up about not being on a ‘real’ network as we hockey fans are. Wonder who would get signed with ESPN first. Hmmm…..

We’ll see, of course, what happens Thursday night, when the playoffs again follow race coverage. I may actually watch the race for 10 minutes or so and see if they can come up with any dramatic buildup.. I wonder…if we all watch a few minutes of this glorious event, will we drive up the ratings?

Maybe Mr Armstrong can affix a “No Hockey” patch to his team jersey in protest.

** Tangent Man — Keith Filling… a fantasy and NHL hockey junkie who has a lot to say about the reality of life experiences, Scotch, hockey, music and the bane of being addicted to a fantasy game. Read more of his work over at his “Off on a Tangent” blog. You can also follow him on Twitter here.