This might possibly be one of the worst off seasons that I can remember. It’s a rare occasion that I find Twitter remarkably annoying and so wonderful at the same time. I have decided to write about a fond hockey memory. Enjoy.

This might possibly be one of the worst off seasons that I can remember.  Maybe it’s all of the free agency signings, the contract rejections, rumormongers going to town because they have nothing better to do. It’s a rare occasion that I find Twitter remarkably annoying and so wonderful at the same time.  The FTP Facebook page continues to be a daily wandering of images, jokes and video and has gathered quite a few people within a week.  I have decided to write about a fond hockey memory.  Enjoy.

A few years back, I had grown frustrated with my IT career. Enough that I just walked away from it and actually became “the cable guy”.  Joke away, I’ve heard it all (Larry, Jim Carey, not of the one year wonder variety either).  Anyway, I had taken up this option as something different to do. I made good money, stayed in shape and met many great people along the way.  At one point, my unapologetic hockey fandom had managed to get me routes, which were entirely made up of incoming Rochester American players. Most of the players live in notable apartment complexes in the Greater Rochester, NY area. This was at the time when Rochester was affiliated with the Buffalo Sabres. I had a great time literally hanging out while I worked with Jason Pominville while he was here in town.  I had found out that one player’s girlfriend who was waiting for the cable to get set up was actually a police officer in Toronto (I want to say Sean McMorrow, but I can’t entirely remember).  This was my usual routine in late August/Early September when all of the players came rolling into town.  Easily my favorite time of year as far as that job was concerned.

One Saturday, I got stuck doing work out near Buffalo, it was hot and miserable all day. The only thing I could think about was getting through the afternoon and getting home to cool off.  I had one appointment left in the day and it happened to be in a private campground.  It had been one of the worst day that I ever had to endure to this point from angry customer to just really endurance testing work, I was in no mood to go chasing down someone to let me into the campground. When I arrived at the gate, the gatekeeper was about to leave (after that, you have to call the person that you are visiting to come get you at the gate). She let me through after I had given the requisite information of the person I was there to see.  I drove around this place feeling completely miserable.  I have no doubt in my mind that “Terry” saw that in my face when I got to his place, where he happened to be renovating the joint. After the typical meet and greet process, in which he was incredibly gracious, I went to work.

Terry and I walked around his place discussing what he would like to have done (which really wasn’t much at all) and as we moved inside, I noticed the most ridiculous amount of Tampa Bay Lightning memorabilia that I had ever seen in one place.  My inner voice just screamed to me “You’ve got to be joking, Bandwagon City”!  We weren’t far removed from Tampa’s Stanley Cup win over the Calgary Flames and this was the summer that Sid Crosby was drafted by my Pittsburgh Penguins.  Seriously though, the volume of memorabilia, I knew he was serious about his hockey.  I had relaxed quite a bit at this point.  He literally had EVERY AUTOGRAPH of every player who had played for the Lightning on a huge board, even the guys who skated half a shift. It was so intense to see the level of how much he loved the Lightning. I obviously fell into a Hockey Nerd Trap.  I had admitted that I was a Penguins fan and the conversation had drifted back and forth, from his team to mine.  It was just an amazing conversation with a complete stranger that I had no interest in dealing with prior to my arrival.  I felt like the rest of my day was set, I was relaxed, I even forgot about the time.  Terry then asked me if I wanted to see something really cool.  At this point, I didn’t think I could possibly see how this visit was going to get any better. He walked into the back of his place and walked out with a small wooden box with a glass cover and his name was engraved on the top.  He held out his hand with the box open, I got immediate chills, the kind you get when you see something completely eerie.

There it was, the Stanley Cup Ring of the 2004 Tampa Bay Lightning with HIS name on it. I am pretty sure I dropped the “F” bomb not knowing how to react to it.  He laughed, I can’t imagine it was the first time he’s heard it.  Terry was incredibly nice enough to allow me to wear it, as any hockey nerd would.  We would go on to talk for a few more hours and I completely forgot how miserable I was prior to the visit.  I had a two-hour drive home that day, but it just didn’t matter to me. I had just had experienced something so cool.

As it turned out, Terry was the Supervising Engineer for the Tampa Bay Arena and Jay Feaster included all of those who helped to keep the building in shape during the season.  If you’ve ever followed my Twitter feed or had a hockey discussion with me, you may have noticed that I RARELY make fun of the Tampa Bay Lighting. Now you know why. 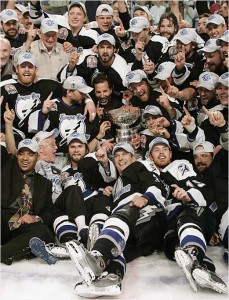 Thanks, Terry, that is a day I’ll never forget…