Though fantasy football drafts will be taking place over the next couple of weeks it is never too soon to start thinking about your fantasy hockey pools and leagues.

With NFL training camps in full swing and the regular season looming right around the corner, many fans are gearing up for their fantasy football drafts. Though those drafts will be taking place over the next couple of weeks it is never too soon to start thinking about your fantasy hockey pools and leagues.

The type of pool or league that you are participating in definitely plays a role in determining which players are selected in the early rounds of your draft. You would obviously be leaning a bit heavier on youth if you were playing in a “keeper” or “dynasty” league, where as you would just go with the best available player at a position of need in a year to year league.

I thought it might be interesting to share the first round selections from one of my most competitive dynasty league’s draft. It will either serve as the start of a mock draft for you in your preparations for this season or just make for some friendly debate on which players you would have selected with the given pick.

It was either this or more debate on the Kovalchuk contract — I went with the fantasy realm!

This draft was conducted prior to the start of last season and you can see the varying opinions on which tier of players to select in the first round. Some went with youth knowing that this player would be on the team for quite some time, while others went for the name recognition of a veteran.

The league is made up of 16 teams and all carry a roster of 30 players that carry over from one year to the next. Here is how the first round shook out with my opinions on the first ten. 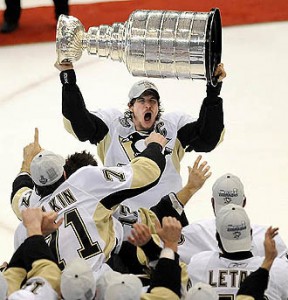 One cannot go wrong with this pick as Crosby has proven to be amongst the best players in the league since his arrival back in 2005. The Penguins captain rewarded his owner with another 100 point season and added value by becoming a dangerous goal scorer.  Would you have chosen 87 at number 1?

Like Crosby, this was a no-brainer. Most fantasy players would select Ovechkin or Crosby in these two spots as they have become the 1A and 1B in the league. Ovie matched Crosby’s 109 points and came up one goal less than his 51, but he only played in 72 games. No matter how you cut it, Ovechkin is a must have fantasy player who is as much a cornerstone in that realm as he is to the Washington Capitals. He is also a monster in the shots on goal and +/- department.

Though Malkin didn’t have the year that many were hoping for, he is still an elite fantasy player. His high draft position came on the heels of his Art Ross and Conn Smythe Trophy wins two years ago. Many expect Geno Machino to bounce back this season and so do I. He still notched a respectable 77 points (28 goals) in 67 games. Those numbers propagate out over a full season to 34 goals and 94 points which would have tied him for 6th in the league’s scoring race.

There is a reason that Kovy was so attractive when he hit the free agent market this summer and it has everything to do with his ability to score goals. He may be even more valuable in the fantasy realm than he is in real life. Though some may argue with taking him this high, he notched 85 points, 41 goals and a healthy 290 shots on goal.

This was the first pick that might have come based on reputation. To this point in his career, Datsyuk had improved his totals on an almost yearly basis and was mentioned in the same breath as Crosby and Ovechkin when it came to the Hart discussion. He had a fine season in notching 70 points and 27 goals, but not one that warranted this high a pick.

I made this pick with nothing but long term upside in mind. Getzlaf is a huge specimen that collects points and PIMs like none other… until last season. He had an injury marred season and took the first step backwards in his young career. This might be my ego talking, but I fully expect him to climb back into the 90 point range this season…especially partnering with Perry and (fingers crossed) Bobby Ryan. 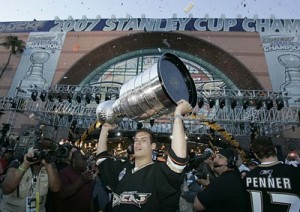 All he does is score… well at least that is what made him the 7th pick of this draft. Parise is a very dangerous goal scorer and he potted 38 more last season. He is still a very young man and with a 45 goal season on his resume, 50 goals are not out of the question for him with the right line pairings and power play time.

The first goalie selected in the league and I can’t question it all that much. He still has plenty of tread on the tires and he has most of his success in the regular season – which is where fantasy championships are won. Sure his numbers were a bit up overall, but he still won 40 games, which will be common in Vancouver and he notched 4 shut outs.

This pick might have been a bit high, but the guy is still good for 30 goals on a yearly basis. Plus you can’t discount the fact that he gets you penalty minutes and shots on goal. Iginla is getting up in years, but is and will be a viable fantasy player for the foreseeable future. 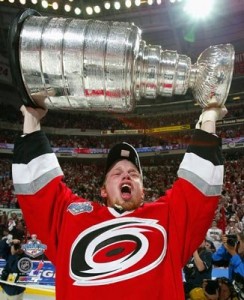 Staal only played in 70 games last year due to injuries, but he still managed a point per game along with 29 goals. This kid is a big time player in the league and is still getting better. He really thrived once the Canes made him their captain last year and that will continue this season as they will be healthy and looking to get back in the playoffs.