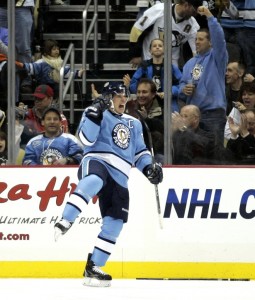 To say that the Penguins dominated the Flames during their Saturday matinee at the CONSOL Energy Center would be an understatement. However they weren’t in control of this game until the middle of the second period, as the Flames got an amazing performance for Miikka Kiprusoff, who through two had faced 36 shots and surrendered only two goals. The Flames goaltender also turned away the game’s number one star, Sidney Crosby on an early penalty shot.

Though the Kipper was in position to be a difference maker on this day, it was the aforementioned Crosby who stole the show. The Penguins captain, who has been in the shadow of Steven Stamkos throughout the season, even though he has been running neck and neck with the youngster in the league’s scoring race, had another huge day in extending his scoring streak to 12 games. Crosby notched a hat trick pushing him two ahead of Stamkos and now trails the youngster by only three goals in the Richard race.

Crosby’s day included a couple of interesting factoids. The first being that this is the third year in a row that Crosby has notched a hat trick on the Saturday following Thanksgiving. The next is that he came within inches of matching Mario Lemieux’s hallowed five goals in five different ways, though he would have done it in just four. He scored even strength, on the power play and finally short-handed into an empty net. Had he scored on the penalty shot, he would have tied the record.

The Captain wasn’t the only star for the Penguins today, as both Brent Johnson and Kris Letang were at the top of their games. Johnson came in after not having played in quite a while and turned a solid effort. He allowed only one goal to the Flames’ Rene Bourque and turned away 30 shots. He also made several sparkling stops during the final period when the Flames started to pour on more pressure than they had all afternoon long.

Letang put together what was probably his finest 60 minute effort of the season. He was very active in all zones, made all of the correct plays with the puck and notched three assists, including a sparkling one on the Penguins third goal. He made a great play to keep the puck in the zone on the power play and made a great back hand pass to Paul Martin that turned into Crosby’s second goal.

Overall, the Penguins put together one of their finest performances of the season and have now gone 9-1-1 in their last 11 games. The team will have tomorrow off before traveling to the New York for a Monday evening match-up with the New York Rangers.

Chris Kunitz led the game with 7 shots on goal.

Seven Penguins had at least 3 shots on goal in the game in pushing the team to 43 on the day.

Brooks Orpik led the Penguins with 24:03 of ice time, while Jay Bouwmeester led the Flames with 24:55.

Will get some quotables up later today after I wade through my audio. You can catch me on the Fourth Period Radio Show on XM Home Ice at 6:15 p.m. EST.