If you’re confused about the lack of credit Sidney Crosby got at the NHL Awards Wednesday night, you aren’t alone. Crosby placed 3rd in the Hart Trophy race behind Henrik Sedin and Alexander Ovechkin.

“He is very mature. In terms of leadership, he really drives our team with his emotion, and obviously, with his play.” – Penguins General Manager Ray Shero 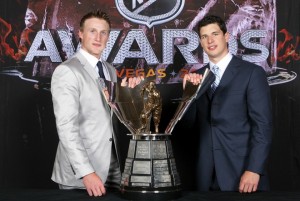 If you’re confused about the lack of credit Sidney Crosby got at the NHL Awards Wednesday night, you aren’t alone. Crosby placed 3rd in the Hart Trophy race behind Henrik Sedin and Alexander Ovechkin.

Crosby did win the Rocket Richard Trophy tying Steven Stamkos. (I’m still bitter about the fact that Stamkos tied Crosby on an empty net goal.) But one award that stuck out that Crosby received was the Mark Messier Leadership Award.

To be chosen by one of the best and most respected hockey players to ever play the game is quite an accomplishment. So what if he didn’t win the MVP or the Ted Lindsey Award, he got chosen by Mark Messier, who pretty much said he was the best player this year.

Some of the things that Crosby does, that not a lot of people know about, is reserving a suite for underprivileged or disabled children in connection with the Make-A-Wish foundation for every home game. He also funds the Penguins’ Learn to Play Program that brings the game of hockey to kids.

Crosby’s work ethic is contagious. The team sees how hard he works every day and follow. An example of his leadership was when Sid took less money in order to give management an opportunity to retain more of their championship nucleus. Geno followed in his footsteps, and next thing you know Staal, Orpik, and now Cooke have all taken what is now Pittsburgh’s own “hometown discount.”

This year was surrounded by some controversy between teammates and/or management. Whether it be after a bad game, bad couple of games, or just pure frustration of a season that didn’t go according to plan.

The Penguins didn’t have the best season but they never spoke badly about anyone in their organization. You never hear one bad thing come out of the locker room about Sidney Crosby. When players leave the Penguins, they only have good things to say about Crosby.

It’s no surprise that he was awarded captain at such an early age; he’s had to learn fast in dealing with the media and all the hype that surrounds him. He’s so skilled at everything he does that it makes you wonder how good he will be at 23.

For Penguins’ fans, we have been spoiled by the talent that the Penguins have and we will be spoiled for a long time. No one wants to leave this team. It’s shown through the contracts signed, and that’s a reflection at how equipped our captain is in helping this team.

Every off season he works on something that he needs to get better at.

It started with faceoffs, then shooting, and now that he is number one in both of those, you have to wonder what he has planned for his next off season?

It’s been a long off season without our Penguins on the ice. Shero is in the process of sculpting the 2010-2011 Penguins team. This season is going to be one for the ages. The first season ever in the Consol Energy Center kicks off against the Flyers, and soon after we have the Winter Classic against Alexander Ovechkin and the Capitals.

One thing’s for sure: this team is young and with our captain at 23, ready to prove his critics wrong, it will be another season in the making of what the Penguins and Crosby have in store for us.

We are spoiled, and we like it that way.

﻿***Amber is a hockey fan from the deep south. She prefers a Penguins match-up over any College Football game and enjoys writing about hockey in general. A Journalism major, Amber is a news reporter for her local newspaper. You can follow her on twitter here.