Pascal Dupuis had other plans and the man that had notched 18 regular season goals, but none during the run to the Stanley Cup last season, was ready to provide a huge “phew” moment for his team that would launch them into round two. 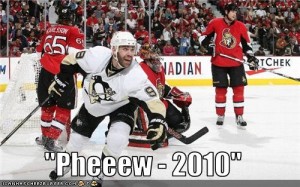 Though the Penguins insisted that this year would be completely different. There wouldn’t be any similarities to last year’s first round match-up with the Philadelphia Flyers… They knew what had to be done and they would be finishing their business in five games on home ice, something that they weren’t able to do one year ago.

Then they found themselves on the wrong end of a 4-3 triple overtime decision that saw them having to go back on the road for a huge game six against an opponent that was gaining confidence and momentum by the day. The scenario seemed eerily similar to the one that they were in during last year’s first round. As the game started, it would begin to get even more so.

That’s right…just like last year, the Penguins found themselves in a 3-0 hole and seemingly headed back to Pittsburgh for a game seven. They had slept through the alarm and looked like a team in danger of making some dubious history. That is until the Penguins had had enough and seemingly flipped the switch that we have all been hearing so much about. They began to dominate again as they had done for large chunks of time during games 2 through 5. 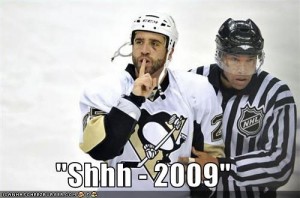 There wouldn’t be one Talbot-esque “shhh” moment this year to spark the comeback, but there were a couple of things that could have been looked at as turning points. One being an inordinately long delay while video replay officials overturned a Senators goal that would have put the Senators up 4-1. Once the decision came in keeping the score 3-1 the Penguins seemed to settle into their game and the stage was set for Pascal Dupuis to provide a “phew” that Pittsburgh and his teammates will never forget.

Though the Penguins had gotten to this point in the series by watching Sidney Crosby score at a super human rate, on this night it would be the secondary scorers who would come together to lift the team.

The Birds got goals from Bill Guerin and two big ones from Matt Cooke, including the game tying tally at 12:24 of the third period. From there the teams exchanged chances and added more than a few “we’ll sell you the entire seat, but you’ll only need the edge” moments to a game that was already a nail biter.

As the buzzer sounded signaling the end of regulation, each team had had a goal overturned via video replay and you got a sense that the momentum that had been with the Senators for most of the first two periods had turned on them and joined the flightless Birds from Pittsburgh.

Early in the overtime period, Chris Neil came within a few inches of sending the series back to Pittsburgh, but Marc Andre Fleury was able to chest the puck he flipped towards the net, smothering it for a face-off. From there the chances started to come in both ends of ice, but it started to look like these two squads were in store for another long night.

However, Pascal Dupuis had other plans and the man that had notched 18 regular season goals, but none during the run to the Stanley Cup last season, was ready to provide a huge “phew” moment for his team that would launch them into round two.

He used his typical blue collar approach to the game to get open near the left face-off circle and Jordan Staal wheeled and dealed behind the net before finding Dupuis for a one timer that found pay dirt behind Pascal Leclaire. Game, set, PHEW! The Penguins had finally sealed their trip to the Eastern Conference Semi Finals, while also earning a much needed rest as they sit back and watch the culmination of the remaining two Eastern series that will determine their next opponent.

Overall, there were moments that weren’t pretty, but the defending Stanley Cup Champions looked like a team that could be very capable of another run to the promised land and “Mr. Phew” Pascal Dupuis will be there every step of the way!

The Senators blocked an insane 216 shots in the 6 game series, an average of 36 per game. Anton Volchenkov, who is a free agent on July 1st, blocked 32 of them.

Sidney Crosby leads all playoff scorers after posting an impressive 14 points (5G-9A) in the series against the Senators. He sits 5 points ahead of the next closest scorer, the Canucks Mikael Samuelsson, who has 9 points (7G-2A).

Chris Kunitz has shown that having him healthy and playing at 100% makes a huge difference. He has already scored more goals than he had during last year’s Cup run, as he notched two in the series. His six points are tied with Bill Guerin for third on the Penguins playoff scoring list behind Crosby and Evgeni Malkin.