(Ed’s Note: You might have noticed the new format that was launched earlier in lieu of game previews. Well, I am also launching a new format for post games. There may be times in which I choose to blow out an actual game story recapping the events as I saw them, but moving forward I will be going with: Five Things. Five things that impacted the game on any given night… )

The Penguins fall to the Flyers and allow a golden opportunity to slip away from them. Instead of moving into a first place tie with the boys in orange and black, they instead find themselves sitting two-points behind them with one less game. That game in hand for the Flyers is going to end up being a huge one… 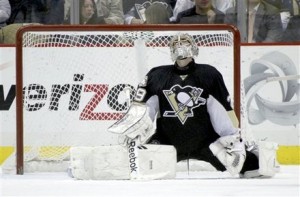 1. The Penguins inability to score a third goal after going up 2-1 – The Penguins scored the first goal of the game, but allowed the Flyers to counter just 3:34 later. They were able to take the lead early in the second period on a Tyler Kennedy shot that squeezed between the legs of Sergei Bobrovsky. That goal seemed to not only spark Kennedy, but his entire team. From there the Birds (and Kennedy) were flying, but were never able to knock a third goal behind “Bob.” That wasn’t for lack of effort though, as they had multiple scoring opportunities, including a glorious one by Kennedy. Had they been able to stretch their lead to a 3-1 margin this game likely could have had another outcome. Instead, they yielded three quick goals to Scott Hartnell, Claude Giroux and Ville Leino just 5:11 apart and the rest is history.

2. The Unsung Hero – Ville Leino quietly become the belle of the ball during last year’s Stanley Cup playoffs and a huge reason why the Flyers made the run that they did. Leino might not have had the impact that some thought he might have this season, but he certainly made a difference in this game. He has quietly become a clutch player — one that can sneak up on you and help his team steal some points and that is exactly what he did tonight. He caught the Penguins defense napping and sneaked out from behind their net to deflect a shot off of the back of Marc Andre Fleury’s leg and into the net for their fourth goal. The goal came shortly after the Birds had a chance to tie the game at 3-3. Leino then came out of the weeds to get himself a sparkling scoring chance from the right side of the goal crease, Fleury made the save, but he stuck in and got his own rebound. He chopped at the puck and sent it end over end over Fleury and in for his team’s fifth goal. He finished the evening with 3-points (2G-1A), a plus-2, 4 shots on goal, and a hefty 67% in the face-off circle.

3. James Neal – I was convinced that this was a game that the Penguins trade deadline crown jewel would rise up, unfortunately it didn’t happen. Now that isn’t to say that he hasn’t been contributing in a number of different ways, but at this point he has got to start cashing in. He had multiple scoring chances this evening, but was only able to find the net with 3-shots. He is only officially credited with 1-shot wide of the net, but it seemed like many more. Neal is playing like a guy who is squeezing his stick to tightly, as is the case when a player is in a prolonged slump. He is clearly shooting for corners and missing with those shots wide of the net. The 23-year-old has just 5-points (1G-4A) since coming over from the Dallas Stars. Could the looming return of Sidney Crosby jump start him? The Penguins certainly hope so… a goal or two from him tonight could have made a significant difference in the game.

4. The Penguins Power Play – Even considering the fact that the Penguins do not have Sidney Crosby and Evgeni Malkin available to them, they still have a formidable group that can man the power play. Unfortunately that group has been anemic, going a very ugly 3 for 59 over their last 18-games. If you don’t feel like doing the math, that is roughly 5%. Unfortunately, contained in that total is a hearty 0 for 4 mark from this evening. Had this group been able to notch even one power play goal, they would have found themselves skating in a one goal game during the third period… who knows what happens in that situation. It is worth noting that this power play has struggled throughout most of the year… also worth noting that they seemingly haven’t found a way to offset the loss of Sergei Gonchar on the unit. Figuring out how to bring a little of what he brought over his time running this power play will go a long way towards winning not only games like this evening’s, but many in April, May and even June.

5. The “Bob” Factor – Sergei Bobrovsky has been one of the most exciting stories in the league this season. Not only has he posted a sparkling 27-11-6 record, but he has seemingly mastered the art of winning big games against the Penguins. Sure they were able to shell him once back in October, but ever since he has slammed the door on them. He even was dominant in the Birds shoot out win last week and was probably the sole reason for their getting a point in the game. “Bob” has also beaten Marc Andre Fleury in 3 of 4 outings in which they have gone head-to-head. I am not saying that the young Russian is getting inside anyone’s collective heads, but it is tough not to notice that he has found a way to beat this team and their star goaltender on multiple occasions. He is making the big saves when he needs to and allowing his mates a chance to open the game up, which they did tonight. That could become something of a problem in a seven game series. However, the Penguins have proven that they can find flaws in a goaltenders game over that stretch of time… for evidence, see Semyon Varlamov back in 2009.