The Penguins and Flyers are battling it out for what could be the top spot in the Atlantic Division and Eastern Conference. Follow along live… 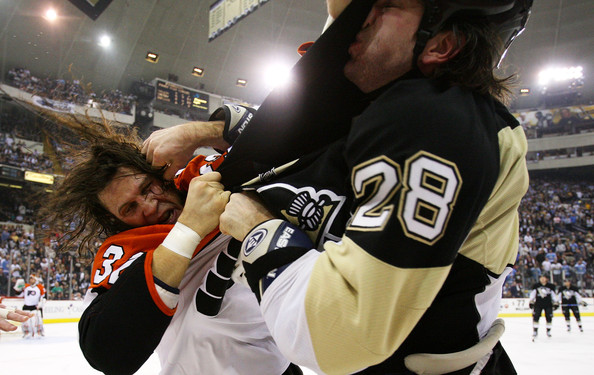 Greetings from my perch high atop the ice at the Consol Energy Center… obviously I am live at the much anticipated game between the Penguins and Flyers and if the first ten minutes are any indication of what we are in store for… Well, let me say that we are some lucky hockey fans.

The first ten minutes of this game has featured power plays for each team, a short handed breakaway for Jordan Staal, several excellent saves and  stirring rendition of the National Anthem by our own Jeff Jimerson.

Before we get to anything else here, I wanted to share the theme of this Penguins/Flyers match… at least it has been for me since their last playoff series in 2009… fittingly, it was the first song played during the warm-up this evening.

It is really starting to look as if special teams is going to be a huge key in this one. As I mentioned, each team has already had a power play, but the short handed chances look like they are going to be there as well. The Staal breakaway came on a vintage Staal read at center ice. He turned on his loping speed and break between the Flyers’ defenders. He looked like he was going to have a pretty nice scoring chance, but lost the puck a bit. The defense closed in on him before he could get a great handle on the puck and by the time he was able to make his move he was in too tightly on “Bob.”

The Penguins were able to control the puck in the zone for close to the entire two-minutes of their power play, but were not able to get the puck to the net. The best moments of the PP came by way of the hands of Alex Kovalev. The PP might not be scoring, but it is certainly fun watching the veteran play keep away on the near boards.

Speaking of the magic man, Kovalev just gave the Penguins a 1-0 lead on a pretty two-on-one. Braden Coburn didn’t seem to know what to do in the situation, though he did leave the shot for his goaltender to handle. Kovy glided in and eventually lashed a shot under the arm of Bobrovsky and into the net. The play was very reminiscent of Kovalev’s heyday!

Aaaaand in vintage Pens/Flyers fashion, I can’t even get the update posted before they do something else… Braden Coburn answers for being the odd man back on the Kovalev goal by notching one of his own. It was a wacky play in which his shot fluttered to the far post and bounced down, off of Fleury’s skate and into the net.

And with that… one of my favorite odd NHL commercials…

Always loved that one! Glad I could find a way to throw it in… He certainly did come back there!

The second period is underway…

There have been a couple of scoring chances each way, but nothing like the first period… at least thus far. One of the best chances for either side came off of the stick of Max Talbot, but he didn’t get near enough mustard on the shot and “Bob” knocked it away…

Not to toot my own horn, but I believe that I called TK with a goal in my earlier blog! He also scored it off the rush, taking the puck to the net… He put a shot on “Bob” and it trickled through and into the goal.

The Penguins just wasted a glorious scoring chance… Tyler Kennedy, or Fruit Bat as we have been calling him round these parts of late, just worked himself free in the high slot, dance “Bob” out of his cage, but couldn’t get a shot off. He carried the puck around the net, found (I think) Paul Martin on the right of the net. Martin slid the puck to a wide open Chris Kunitz, who fired a deflected shot into the protective netting with a yawning cage in front of him.

Well, just like that the Flyers have hopped up by a goal… they quickly got an equalizer by Scott Hartnell… the goal resulted in quite a scrum around the Penguins net and though they were trying to dispute the goal, it was a good one.

Moments later, the Penguins coughed up the puck at their own blue line — another horrible no look drop pass — and the Flyers took it through the neutral zone with speed. Andrej Meszaros fed the puck to Sean O’Donnell, who slid it to a streaking Claude Giroux (another player to watch from my blog earlier…). Giroux made a quick backhand forehand move to throw Kris Letang off a bit and he lashed a shot that beat Fleury…

Two periods in the books here and the Flyers lead 3-2.

Should be an interesting third period of action. There haven’t been many shots in the game, as the Flyers lead the Penguins 16-13….will that pick up in the third?

The officials seemingly missed a high stick on James Neal that opened him up a bit… what could have been a four-minute advantage turned into nothing more than a couple stitches for Neal. Can’t complain too much though… I recall one of two situation where the Penguins were the benefactors of the same call.

The Penguins just sent the dangerous duo of Max Talbot and Pascal Dupuis on a two-on-one break… no offense to either, but that is maybe the worst two-on-one combo you could have asked for. They did each put a shot on goal, but couldn’t beat “Bob.” The young goaltender tried his best to give Talbot another crack at it before his shift ended, when he shot a gloved puck back out into the high slot, but Talbot couldn’t beat him with the shot.

The Flyers have just opened a two-goal lead. Ville Leino walked out from behind the net and deflected a shot on Fleury. Unfortunately Fleury had the puck graze off of his leg and into the goal. The second such puck to do that tonight…

The Flyers get a fifth goal on another weird play… Leino got another crack, this time from the right of Fleury. He put one shot on goal and the rebound bounced right back to him. He shot the puck again, but it flipped up over Fleury and into the net. However, Z Michalek was there to knock it aside almost immediately… play continued for a moment, but the referee was in perfect position to see the puck cross the line…

The Penguins got their chance to try and get one back, but were again ineffective on the power play. They have got to get that fixed up before the playoffs, as their lack of productivity with the extra man is something that could end up haunting them.

The Birds get another crack at the power play and they utilize it to give up a handful of shorthanded chances. They also went off sides on themselves once as they tried to enter the zone. As I stated in the last entry… it needs work.

A golden opportunity lost… however, they live to fight another day! More post game…