Crosby brings forth an unforgettable evening in Pittsburgh as he plays his first game since being knocked from the line-up back in January with a concussion. 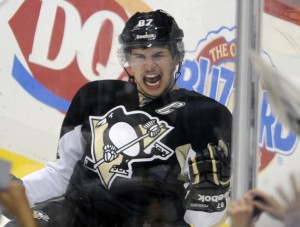 No one really knew what to expect from Sidney Crosby’s first game since January, but it felt like it had the potential to be a special evening in Pittsburgh. The interesting thing is that the word “special” doesn’t even come close to describing what played out on the ice at the Consol Energy Center.

There was electricity in the air and that just grew as the events staff played a Crosby montage on the jumbotron prior to the warm-up. The footage drew the kinds of cheers that one might have expected to hear when the goals were actually being scored.

The moment can only be compared to the feeling you get while watching the movie Jaws. You hear the telltale music…Da Da…Da Da… Da Da… Da Da… Da Da… You are on the edge of your seat, not quite sure what to expect when the shark finally appears in the shot and then BOOM! That is exactly what happened this evening when Crosby finally hit the ice for the warm-up and then for the start of the game.

It was a pretty special moment for all involved. Even Dan Bylsma who is typically all business, at least while behind the bench allowed himself to sit back and be a hockey fan on this night.

“I think I embraced it, I went out there for warm-ups which I don’t normally do and I made sure — usually I am staring straight forward when the players come out to the ice but I kind of wanted to see the reaction when Sidney stepped onto the ice,” Bylsma said. “There was a large part of me that was a spectator and was a fan tonight. So I did enjoy that a little bit.”

There was certainly a lot to enjoy on this night as Crosby burst out of the gates like a bull out of the chute during a rodeo. He was on the ice for the opening draw and was flying during his first shift in almost a year.

Though Crosby didn’t score on that first shift, he would pick up his first goal on his second trip over the boards. He built up some great speed as he headed towards the neutral zone and took a feed from Pascal Dupuis. The Islanders defense seemed to be caught off guard as Crosby cut into the offensive zone and roofed a backhand over Anders Nilsson, who was making his first career start. Upon scoring the goal, it was as if the world lifted off of Crosby’s shoulders. The emotion of the celebration was something that wasn’t lost on his coach.

“We’ve seen stuff like that before, but it kind of played out in slow motion when he got the puck around the red line and had that burst of speed,” Bylsma said of Crosby’s goal. “We’ve seen that backhand before and that was pretty special, I enjoyed his celebration.” 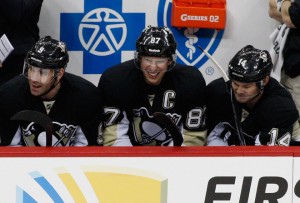 Crosby seemed to enjoy it himself, as he was caught chuckling at his reaction when he saw it from the bench on the jumbotron. He realized that he used some colorful language upon putting his team up 1-0.

“I was obviously really excited,” the Penguins’ captain said of his goal celebration. “Part of waiting to play is you’re also waiting to get that first one and it came pretty early which was nice. I was watching the replay and read my lips — hopefully everyone wasn’t reading lips at home – (laughs all around). It was pretty exciting and I couldn’t hold that in.”

Crosby wasn’t done after that first goal and pretty much did whatever he wanted on the ice. He looked to be the fastest guy on either roster. He was making crisp passes, winning face-offs and taking shots from all over the ice. He would go on to finish the evening with 4-points (2G-2A), 8 shots on goal, a plus-3 rating and robust 67% winning percentage in the face-off circle.

The evening was the stuff of fairy tales, as Crosby left the league playing the finest hockey of his career and he looks to have returned to it playing at the exact same level.

Crosby did take a couple of shots early in the first period, but dealt with them as any other player would have. He was happy to get the contact out of the way early, as it eliminated all lingering concerns that he might have had coming into the night.

“I was mad at myself for putting myself in that position,” Crosby said of the early hits. “I was flat footed and standing up straight and was a pretty easy target there, but once you get to the bench and see that everything is good that is always a good feeling and I was glad that I got that over with early.”

Crosby knows that contact tonight is just the start of what he is due to face in the coming weeks. 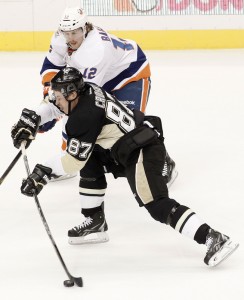 “There’s going to more hits and probably harder ones so to come out of that ok, I think it gives you some reassurance — I don’t think that I needed it, but it’s always good in this process to get that out of the way early.”

The night was a rousing success for all involved as Evgeni Malkin and Jordan Staal led units in the same game as their captain for only the fourth time in close to a year. All of the Penguins’ units looked dangerous at times during the evening and it seemed to stun Marc Andre Fleury who picked up his second shutout of the season.

“I felt like a fan out there with a good seat just watching him going out there and then he goes to the bench and then you see Geno, Nealer and Sully go on the ice, then the next time it its Staalsy going on,” Fleury said almost disbelievingly. “A lot of depth on our team and a lot of good players… it is a lot of fun to watch them play.”

Though the night will forever be remembered by Penguins’ fans and those around the league as the one in which Sidney Crosby came back, no one will have much time to dwell on it as the team is set to face the St. Louis Blues here at the Consol Energy Center Wednesday night.

Zbynek Michalek also made his return to the line-up, Guy Junker of WTAE in Pittsburgh joked with him post game about the fact that everyone was pretty jazzed about his return:

“Yeah, haha, I know it was all for Sid and he deserves it,” said Michalek who posted an assist, 3 shots on goal and a plus-1 rating. “We are all so happy for him. He worked so hard to get back and to have a great first game like we were so happy. He is a big part of our team and we are so happy to have him back.”

Considering that we were running a #SidmasSoundtrack hash tag earlier, it is worth noting that the warm up selections were quite fitting: Back in the Saddle – Aerosmith, My Hero – Foo Fighters, Back in Black – AC/DC, The Boys are Back in Town – Thin Lizzy, and finally a staple here at the Consol Energy Center, Everlong – Foo Fighters.

Pascal Dupuis slid right back in beside his captain and posted a 3-assist night. He also registered a plus-3, and 2 shots on goal.

Evgeni Malkin looked to take his game up a notch this evening and posted 2-points.