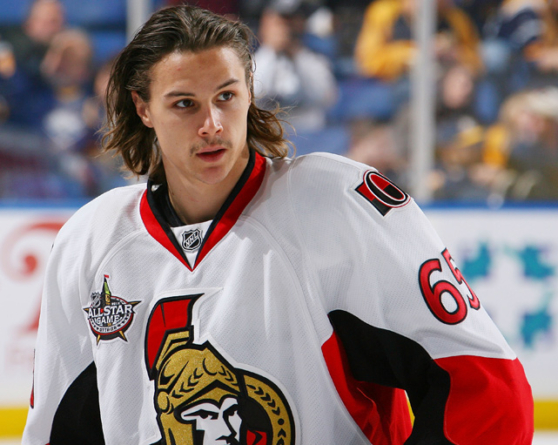 Erik Karlsson met with the press in Ottawa this morning and he isn’t exonerating Matt Cooke.

Erik Karlsson is meeting with the press for the first time this morning since his Achilles Tendon was lacerated by the skate blade of the Penguins’ Matt Cooke and he doesn’t seem to be buying into the thinking that the injury was just a freak accident.

We are following along with the presser via Ottawa Sun reporter Bruce Garrioch’s twitter feed. Here are some of the thoughts and quotes coming out of the proceedings.

Having had Karlsson ranked as the number one fantasy defenseman over at NHL.com in my weekly “On the ‘D’-Fence” column since last November, this is great news. Hopefully Karlsson is healing well and will be ready for next season.

That’s where the good will ends though, as he quickly points out that he knew exactly who he was going into the boards with and isn’t surprised because (Cooke) “has been after me before.” Karlsson goes as far as to say that he doesn’t believe that he would have been injured if it was another player. Here are the tweets:

“I knew exactly who it was so I was taking bit of caution,” says Karlsson. #Sens

Doesn’t think it would happen if it was another player than Cooke.#Sens

Cooke tried to reach out to Karlsson, but he didn’t respond:

Didn’t reply to Cooke’s text. “He has been after me before.” Said it shouldn’t have happened. #Sens

“At least he reached out which I didn’t expect. We’re going to leave it at that,” said Karlsson. #Sens

Karlsson goes on to throw his lot in with those who feel that the Cooke’s actions were intentional.

Knows who will hit him and who is not. “He knows exactly what he is doing out there. That is why I am sitting here with leg in cast.”

However, he doesn’t believe Cooke meant to cut him, so much as “knock” him out.

“I don’t think he did it on purpose … He meant to hit me hard and knock me out.” Says Karlsson on Cooke. #Sens

Hopefully this puts this incident to bed, as well as brings more focus to the fact that guys should be wearing the Kevlar protective gear that is available to them. What seemed like a freak incident is happening a little more often as evidenced by the ugly laceration suffered by Winnipeg defenseman Zach Redmond yesterday.

Here is the full text of the Karlsson presser compliments of NHL.com — via contributor Al Willig. The comments from Karlsson are a lot less harsh when you see them in context…

OTTAWA – Ottawa Senators defenseman Erik Karlsson spoke to the media for the first time Friday morning since his season was ended nine days ago when his left Achilles tendon was cut in a collision with Pittsburgh Penguin forward Matt Cooke.

Karlsson said he believes Cooke, who was not penalized on the play, could have prevented the outcome.

“The puck came around the corner, and I was going to get it,” Karlsson said. “I had a [Pittsburgh] player behind me and I knew exactly who it was. I was taking a bit of caution. He missed the hit but he still got me somehow. It could have been prevented. I don’t think it would have happened if it was another type of player. But I don’t think his intention was to cut me with the skate. I refuse to believe that anyone would do that.

“As soon as I saw it was [Cooke], I knew what was going on. I’ve played long enough to know who’s going to hit you and who’s not. As I always do, I moved at the last second and he missed me, but he still went for me. I lost the strap on my helmet and his hands were high. He reached out his leg, which I don’t think he had any reason to do. I don’t understand why it happened. He had full control of his body, and he knows exactly what he’s doing out there. That’s why I’m sitting here with my leg in a cast.”

The play happened late in the second period of a game Feb. 13 between the Senators and Penguins. Karlsson, who won the Norris Trophy last season, had surgery to repair the tendon and general manager Bryan Murray expects his star defenseman to need at least three-to-four months to recover.

Cooke reached out to Karlsson after the incident, but the defenseman brushed off any attempt at an apology.

“I received a text from [Cooke],” he said. “I didn’t think too much of it and I didn’t reply. I don’t think that we have anything to say to each other. He’s been after me before. Ever since I got into the League he’s been one of the guys you’re always aware of when you’re playing against him. It’s a freak incident, but I still think it’s an injury that shouldn’t have happened.

“I think he said what he thought was right, I think you’re going to have to ask him what he wrote. At least he reached out, which I didn’t expect, and I think we’re going to leave it at that.”

Karlsson said he can remove the cast from his foot, but he can’t put any weight on it or “do anything with it.” The defenseman admitted that at present, it’s difficult to pinpoint when his rehab – and eventual return – will occur.

“I’ll be back; the question is when,” Karlsson said. “[I’ll] definitely play next season. It’s difficult to say right now. I can’t really do anything with my foot. But the doctors did a great job, and they said I should have no problems going forward. So when I come back I’ll be 100 percent, and hopefully in even better shape than I was before.”

When asked about wearing Kevlar socks to prevent any additional injuries in the future, the defenseman admitted that it was a real possibility, despite the drawbacks.

“Probably [I will] now,” Karlsson said. “Especially since this happened to me, I’ll probably do it. I think it’s one of those things we’re going to need to keep looking at, and try develop something that will fit everybody. Right now there’s only one sort of sock, and it’s tough for everyone to wear it because we’re all different.

“I had no intention of ever wearing it before. I don’t think it’s comfortable enough for me. But obviously, this is going to change how I look at things. The skates are so sharp, and we have so much power. If it hits in the wrong spot, you’re going to get cut right away. You hate to see that happen.”

With an injury that will likely cost him the season, Karlsson has had to remain content with watching from the sidelines. Despite being plagued with injuries, Ottawa remains in the playoff race.

The Senators currently sit in seventh place in the Eastern Conference, and are riding a three-game winning streak.

“It’s tough to watch, to be honest with you,” Karlsson said. “The guys are doing so well. You want to be out there helping and be a part of everything. You never know when that time comes, and if we’re still in [the playoff race], and I’m feeling healthy, but I’ll have to wait a couple of weeks to know how long it will be. They say everyone’s [healing pace] is different. I was fortunate that the whole Achilles tendon wasn’t cut. Hopefully it can heal [a little quicker] than normal.

“This is the first time I’ve had an injury where I know I won’t be back for a while, so it’s tough. It’s a situation you can’t change. There’s nothing I can do. But I can’t get my head down because of this thing; it’s just going to make me feel worse. I’ve got to try and stay positive. Every time I’m around the locker room, I’m still going to be a happy guy, and when I get home, my wife [Therese] appreciates that I’m happy as well. I don’t find any reason to think in a negative way. I just watch hockey as I always did, and just try to imagine situations out on the ice.”