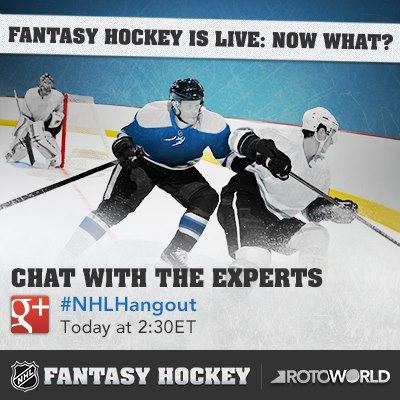 First of all, I wanted to apologize for my week long absence from the site. I hurt my back pretty badly last weekend and have been on the shelf throughout most of the week. Not exactly sure what I did, but it is still causing some havoc today and I am functioning at less than 100 percent. I missed the Penguins/Lightning game last Sunday night in Pittsburgh and have been doing my best “little old man” impersonation since, as I move from rocking chair to bed and back to rocking chair!

While I’ve been shelved, I did manage to get some work done for NHL.com, where I help make up a Fantasy Hockey covering Voltron along with Matt Cubeta, Matt Sitkoff, Serge Feldman, Pete Jensen, Chris Foster and Justin Goldman. In addition to the written word, we occasionally take part in Google+ Hangouts where we answer fantasy questions and discuss a number of other fantasy issues. We recorded the latest yesterday and I wanted to share it with you in case you missed it. Michael Finewax, Hockey Editor for Rotoworld, also takes part in our chats.

As you can see, I really do have a face that is built for radio… well, it isn’t all that bad, but self depreciating is what we do around here!

We do the hangouts on a by-weekly basis on Thursdays, with the next one taking place on 03/14/13. We usually switch up who participates in the events, but I have been on the last two editions. You can see the first one that I took part in by clicking here!

I am planning on resurrecting “Just Saying…” which I have only done one time since launching From the Point three years ago. It will run on Fridays… the first new edition will go live later today.

Also, speaking of launching FTP, we are turning three years old on 03/05/13! Crazy how the time flies! Seems just like yesterday that good ole’ @kicksavetwenty and I were kicking around the plans for creation and launch!

Thanks for the support and stay tuned for more later!