Dan Scifo gives us a look at last nights victory over the New York Rangers that solidified home ice advantage for the Penguins in the first round of the Stanley Cup Playoffs.

PITTSBURGH — The Pittsburgh Penguins, with a victory Thursday night against the New York Rangers, clinched the No. 4 seed and home-ice advantage throughout the first round of the Stanley Cup playoffs.

But Saturday’s regular-season finale against Philadelphia will be anything but meaningless.

Evgeni Malkin scored his 49th goal of the season and Marc-Andre Fleury ironically stopped 35 shots to equal Tom Barrasso’s franchise record of 226 wins in a 5-2 victory against the New York Rangers Thursday at Consol Energy Center.

“I’m getting old, I guess,” said the 27-year-old Fleury, now in his eighth season.

“It’s a great honor for me to catch up to a guy like Tom. He’s a guy I always looked up to when I was younger.”

Fleury, who won a Stanley Cup in 2009, would like to equal Barrasso’s two championships and he will get another chance when the Penguins open the playoffs as a No. 4 seed in the Eastern Conference for the fourth straight season.

The Penguins’ best-of-seven set begins next week at Consol Energy Center against their hated cross-state rivals from Philadelphia, but the two teams could offer a series preview when they meet in the regular-season finale Saturday (4 p.m.) in Pittsburgh.

“It’s kind of a different scenario playing them in our last game knowing we are going to meet them in the playoffs,” said Penguins’ captain Sidney Crosby.

“We obviously want to play well going into the playoffs, but I’m sure both teams aren’t going to want to show everything. I think we had a pretty good idea we were going to see them; it was a matter of where we were going to start.”

The Penguins don’t think Saturday’s regular-season finale will turn into last Sunday’s fight-filled Flyers’ victory that saw, at one point, coaches jawing back and forth on the bench while all 10 players brawled on the ice.

“It’s a game against an opponent we’re going to see in the playoffs, so it’s a significant game,” said Penguins’ coach Dan Bylsma.

“The defensive-zone coverage was maybe our best game in recent times,” Bylsma said of his team, which was outscored, 29-24, during the mini-slide. 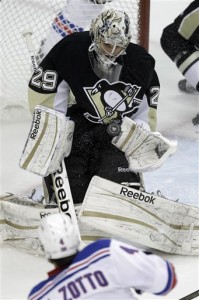 Bylsma didn’t say whether or not Neal, Sullivan or defenseman Matt Niskanen would play Saturday against Philadelphia.

“We obviously have some players that are banged up,” Bylsma said. “We are going to have to see if there is anybody else who might not be able to, or at least will be better off resting before the playoffs.”

Fleury, whose 42 victories tie Nashville’s Pekka Rinne for the league lead, rebounded from a three-game losing streak and is one win shy of equaling Barrasso’s single-season record of 43 wins. His left pad stop on Rangers’ sniper Marian Gaborik early in the second period prevented New York from tying the game and allowed the Penguins to eventually take a two-goal lead.

Malkin, now with 107 points, holds an 11-point lead in the NHL scoring race over Tampa Bay’s Steven Stamkos. He needs one more goal to become the sixth Russian-born player to score 50 goals in a single season and the 16th player in franchise history.

Malkin’s 49th of the season, a one-timer from a Kunitz backhand feed in the third period, had the standing-room-only sellout crowd chanting “M-V-P,” another award he might add to his trophy case by season’s end.

The Rangers, with the No. 1 seed in hand, rested Vezina Trophy favorite Henrik Lundqvist as backup Martin Biron stopped 27 shots in his 500th career start. Biron, who made his first career start Dec. 26, 1995 at the Civic Arena, last played in a 5-2 loss three weeks ago against the Penguins.

Brandon Dubinsky and Artem Anisimov netted goals for the Rangers, who have a chance to win their first Presidents’ Trophy since the 1993-94 season.

Kunitz started the scoring though, equaling a career-best 25th goal of the season, 1:11 into the game when he redirected a shot from Letang, who registered his second straight 40-point season with the assist.

Former Penguin Ruslan Fedotenko set up the tying goal 3:12 later by Dubinsky, who put a loose rebound from the slot behind Fleury. 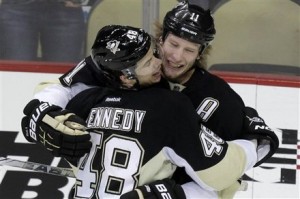 Kennedy helped the Penguins quickly regain the lead as Biron stopped an initial try from the point, but the Penguins’ winger one-timed a sharp angle rebound over the shoulder of the Rangers’ goaltender.

Midway through the second, following Fleury’s key pad save on Gaborik’s one-timer from the top of the crease, Park banked his seventh of the season off Biron and into the net, giving the Penguins a 3-1 lead. Pascal Dupuis received the primary assist, extending his NHL-best point scoring streak to 16 straight games.

“I don’t think, when you look around the league, you’re going to expect to see Pascal Dupuis’ name there, but he’s done it playing throughout our lineup with different players and he’s been rewarded,” Bylsma said.

Malkin upped the Penguins’ lead to 4-1 midway through the third and Anisimov scored a late power-play goal for the Rangers, but it wasn’t enough as Letang added an empty-netter in the final minute. 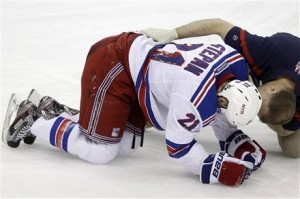 After the game, Rangers’ coach John Tortorella called the Penguins “one of the most arrogant organizations in the league,” stemming from a late third-period incident where defenseman Brooks Orpik was assessed a five-minute major and a game misconduct for a knee-to-knee hit on New York center Derek Stepan.

“It’s a cheap, dirty hit,” Tortorella said. “I wonder what would happen if we did it to their two whining stars over there.”

The Penguins can’t focus on the fallout from Tortorella’s comments now. Not when they could be playing eight straight games against the Flyers.

“It’s a good feeling out process and we’ll know what to expect heading into the playoffs,” Kennedy said.

NOTES: Kunitz, who registered his 200th assist on Thursday, last scored 25 goals with Anaheim during the 2006-07 season…Malkin, selected as the team’s most valuable player, is on a seven-game point scoring streak and has at least one point in 13 of his last 14 contests…Crosby has 10 points in his last four games and 23 in his last 13. He also has points in 14 straight games against the Rangers…Kennedy has 11 points in his last 13 games…Jordan Staal is one point shy of a career-best 49 points…The Penguins are 31-0-3 when leading after two periods…The Penguins are 14-3-4 in their last 21 home games against the Rangers and 23-10-8 in their last 41…They won their fourth straight against the Rangers, outscoring New York 16-5 during that span…Thursday’s game set a single-season attendance record and was also the Penguins’ 250th straight sellout, a five-season streak that began Feb. 14, 2007 against Chicago.