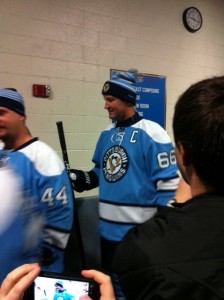 PITTSBURGH — There isn’t even a comparison in Mario Lemieux’s mind.

Sidney Crosby’s current dominance of the National Hockey League is more remarkable than Lemieux’s three-decade reign over the game.

“What he is doing now is much more impressive than what I did years ago,” Lemieux said. “I think it’s much tougher now the way the league is set up and for him to go out and do the things he does every night is incredible.”

Crosby saw his 25-game point-scoring streak snapped during a shootout loss Wednesday night against the New York Islanders. It was the longest stretch since in almost 20 years as Quebec’s Mats Sundin reeled off a 30-game point streak during the 1992-93 campaign.

“He’s an incredible player and person and what he did this year with the 25-game streak is pretty hard to do in this day in age,” Lemieux said.

In Lemieux’s day, scoring was wide open, and defensive schemes less advanced, giving skilled players like the Penguins’ owner and others an opportunity to put up point totals that might never be equaled.

However, Crosby’s 25-game point streak was three games of tying Lemieux for the second-longest streak in franchise history – set before Crosby was born during the 1985-1986 season when he put up an astounding 141 points. The franchise record is 46 straight games with a point, also set, not-surprisingly by Lemieux.

After all, Lemieux dominated the National Hockey League throughout his Hall of Fame career the same way Crosby is currently doing. Lemieux, who housed Crosby when he first entered the NHL, pointed to the Penguins’ captain’s tireless work ethic.

“That’s why he’s the best in the world,” Lemieux said. “I don’t think what the opposition does really bothers him because he knows what to do on the ice and he does it every shift.

“He has the ability to do pretty much whatever he wants out there if he puts his mind to it.”

Much like Lemieux did, capturing two Stanley Cups as a player, three Hart Trophies, six scoring titles, an Olympic Gold medal in 2002, and a career-best 85 goals and 199 points during the 1988-89 season.

Still, the Penguins’ owner is more impressed with Crosby’s streak than his own dominance of the game.

“I don’t think he worries too much about the opposition,” Lemieux said. “It’s all about his game and his preparation for the game.

“He thinks about hockey 24 hours a day, even in his sleep, it seems like.”

Lemieux demonstrated his determination not only as a player, but also as an owner as he rescued the team out of bankruptcy in the late 1990s and helped the team remain in Pittsburgh with the construction of the Consol Energy Center.

“The thing I like about Lemieux is that not only is he a great hockey player, but he stuck with Pittsburgh,” former teammate and NHL Hall of Fame defenseman Paul Coffey said. “At the end of his career, he could’ve went to New York or Montreal and made $10 or $15 million a year.

“He could’ve bailed out when the team was in trouble, but he believed in Pittsburgh.”
A new collective bargaining agreement and a collection of young talent gave have put the Crosby-led Penguins in the national spotlight again.

“Anytime you can host a Winter Classic in your city it’s very special,“ Lemieux said. “It’s exciting for the franchise, the players, and of course the fans supporting us throughout my career since I’ve been here.

“We struggled for many years before the lockout, we didn’t compete at the level we wanted to, but the new (collective bargaining agreement) helped us put a great product on the ice and compete.”
Crosby is also most certainly doing his part.