The Penguins will face the Flyers this evening with a first place tie in both the Atlantic Division and Eastern Conference on the line. 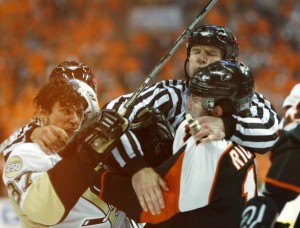 Well, well, well… though the Penguins have spent most of 2011 dealing with the fact that the hockey gods, the fates, the whatever you want to call its decided to serve them up a hearty slice of sheet pie, here they sit just two points out of a first place tie with the Philadelphia Flyers. That’s right campers, a first place tie for not only the Atlantic Division lead but the top spot in the Eastern Conference.

For a team that spent the first three months of the season without Jordan Staal and the last three without Evgeni Malkin, Sidney Crosby and countless others, the above is teetering on the edge of a miracle.

Now, a victory over their dreaded cross-state rivals wouldn’t guarantee the Penguins anything, especially when you consider that the Flyers would still have a game in hand, but it would but them in a good spot.

Of the remaining games on the Penguins schedule, it is feasible that they could earn points in all of them — especially when you consider that all of the games would be against teams behind them in the standings.

Aside from one last home game next Tuesday against the New Jersey Devils, they will be on the road to close out the season. They head into Tampa Bay, Florida, Long Island and Atlanta, all of which are imminently winnable games. The Devils game is a bit of a wild card, as they tend to play the Penguins very tightly, but I would like to think that the magic of the team’s “Shirts Off Of Our Backs” promotion, coupled with it being the final home game of the season could earn them at least a point.

That makes this evening’s match-up with Philadelphia a pretty immense one for your flightless fowl.

I have decided that moving forward, in lieu of doing a standard game preview I will be giving you a few things to look for in a given match-up. I will also point out a few things that I am looking forward too. I feel that it is the best way to go. You might have noticed that I have previewed probably 1/3 of the games this season. My thinking – why bother! There are 8,000,000 previews floating around… not to mention the one you can get in the daily fish wrap… anyway… here is what tonight holds for all of us.

First of all, who doesn’t love a Penguins/Flyers match-up. It is amongst the best rivalries in all of sports and it rarely produces a dull game. There is always a healthy dose of physical play, plenty of scoring chances, “Crosby Sucks” chants (in Philly, whether he is in the line-up or not), Pierre Mcguire/Mike Richards endless love posters and much more! No matter which side you root for, it is tough not to get into this game… whenever it’s played and wherever it’s played.

Tyler Kennedy – I feel that he is a wild card tonight. Though he isn’t the biggest guy on the ice, he has pulled more than his fair share of weight this season. He has reinvented himself from a guy who used to come out or corner, ride up the boards and try to snap a shot off from the face-off circle. The new TK isn’t afraid to go to the front of the net, is tipping pucks, getting rebounds and scoring dirty goals. That is what it is going to take for a victory tonight and I am marking him down for a tally right now.

Sergei Bobrovsky – I have loved watching this kid all season long and tonight will be no different. He absolutely stoned the Penguins during his first trip into the building back on opening night and I fully expect him to give that a go again tonight. He has been an amazing find for the Flyers and gives them a chance to win 98% of the time that he mans the crease for the team. He played some superb hockey against the Penguins last week, earning his team a point. He will want some revenge this evening.

Marc Andre Fleury – On the end of the ice we have the Flower… what can be said about him that hasn’t already during his amazing season? He will be looking to match “Bob” save for save. We could be in for a good old fashioned goaltending duel… and not the kind where each guy makes three saves a period. Whoever blinks first this evening will come away with the two points. 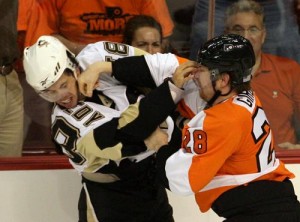 Claude Giroux – Giroux has quickly become one of my favorite NHLers. He is already teetering on the edge of becoming the best player on his team and I think it will happen before long. Say what you want about Jeff Carter and Mike Richards, both are great players, but Giroux is a star in the making. He has long given the Penguins headaches and will be the guy to watch tonight.

Cover of ICEtime – (for those of you attending the game tonight) watch out for the ICEtime cover boy this evening… not sure why, but I have a sneaky suspicion that “he”…. Whoever it is… will have a big evening and be named one of the three stars of the game.

Cy Clark – One last one for those folks actually attending the game… most of you know Cy (Hulkster) from seeing him around games, facebook etc. However, the Flyers always seem to bring the “A” game out of him. I am pretty fired up to see what he has in store to taunt the Flyers as they venture into the Consol Energy Center for the final time this regular season.

Here’s hoping that this isn’t the last time we see these two teams play this year. I know that there is an awful lot of ribbing that goes back and forth, but the games are always wildly entertaining. I don’t know about you, but I could stand to see seven more games between the two, with a ton more on the line than a measly division or conference crown at stake.

Sidney Crosby skated again this morning and is looking ever closer to returning to the line-up. There is no timetable for his return, but if I were a betting man, I might consider putting a couple bucks on the Penguins final home game next Tuesday against the Devils as one in which he might make his triumphant return. His workout routine makes me want to channel Ivan Drago and say “He is like Iron!” No mere mortal should be this close to returning after missing such an extended amount of time, but that is just one of the things that make him special.

Mark Letestu will make his return to the line-up this evening and again will be the pivot for the top line. Personally I am thrilled, as Max Talbot just wasn’t getting that job done. Look for Testy (RANGO) to make immediate impact…

It is looking more and more like Dustin Jeffrey’s season is over. Though there is no definitive word as of yet, the team announced that he will require further examination, as his MRI found some damage. I think the fact that the swelling etc didn’t allow an MRI for four days told me all that I needed to know.

As I tweeted earlier, the Penguins have re-assigned Brad Thiessen to their Wilkes Barre Scranton affiliate. Thiessen didn’t log any minutes, but was dressing at Marc Andre Fleury’s back-up while Brent Johnson worked through a minor injury.

TO PARTICIPATE IN “STUDENTS FOR STANLEY” BANNER CONTEST

PITTSBURGH – With the 2011 Stanley Cup Playoffs fast approaching, the Pittsburgh Penguins are reaching out to students in Allegheny County and the City of Pittsburgh to capture the excitement of the NHL playoffs through a banner-making contest encompassing Grades 1-12.

Each school in Allegheny County is encouraged to create a 4’x6’ banner and submit only one banner per grade level to represent their school.

There will be one banner selected for each grade as a “Students for Stanley” contest winner.  These 12 banners will be displayed on the CONSOL Energy Center concourse during home playoff games in the first round of the 2011 Stanley Cup Playoffs.  The banners for each winning grade will also be featured on the Penguins’ website.

One banner will be named the overall winner for elementary, middle and high school levels.  Each overall winner will receive a commemorative “Students for Stanley” trophy for display at their school.

The Penguins’ organization has been hosting the “Students for Stanley” rewards program for Allegheny County students since 2008.

I will be live at the Consol Energy Center this evening bringing you all of the action… please keep it here.

Finally, a theme for the evening…  Walk Through Fire – Overkill