The Penguins are withing four points of the New York Rangers, can they win the Atlantic? 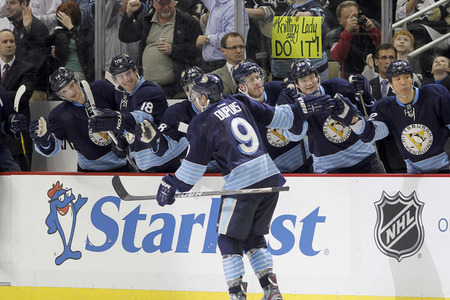 Since the calendar flipped to 2012 it seemed improbable that the Pittsburgh Penguins would be able to catch the New York Rangers in the race for the Atlantic Division crown. It seemed even less probable when the Boston Bruins blew a lead against the Rangers last Sunday and allowed the boys from Broadway to pull ahead of the Birds by ten points.

Then something interesting happened – the Penguins, who are in the middle of their second 8-game winning streak of the season continued to win, while the Rangers dropped three games in a row. Suddenly the Penguins find themselves just 4-points behind the Rangers, who no longer have any games in hand, as each team has played 67 and face them two more times over the final 15-games of the season.

Interestingly enough many Penguins coaches and players knew that they had an outside shot at being in this situation back on Feb. 21, the date of their last meeting with the Rangers, if they were able to get hot and sweep the remaining games against the Blue Shirts.

“Yes, the New York Rangers,” head coach Dan Bylsma said following his team’s morning skate on the Feb. 21, “the best team in the East, by nine points, 10 ahead of us, and certainly a team where if we have any idea that we’re gonna catch them, we’re gonna need to win all three (remaining) games against them, starting with the one here tonight.”

The Penguins took care of business that night on home ice, knocking off the Rangers 2-0 and now find themselves in position to finish the job if they can keep the ship on course, earn more points than they lose and beat the Rangers in the final two contests of the season.

The first of those two remaining games comes on Thursday night at Madison Square Garden, the first of a three game road trip against Atlantic Division rivals which includes contests against the Philadelphia Flyers and New Jersey Devils.

Though the road isn’t an easy one, the Penguins are definitely in much better position to claim the Atlantic division crown than they were just one week ago and the Penguins just may have a trump card that tips the ice in their favor even more – Sidney Crosby.

The Penguins’ captain, who has been out of the line-up since Dec. 5 will not take to the ice on Sunday afternoon against the Boston Bruins, but all signs are pointing to the fact that he could lace them up Thursday in the Big Apple.

Adding a player who many feel is the most gifted on the planet to an already formidable line-up that includes Evgeni Malkin, Jordan Staal and Marc Andre Fleury, would have to make the Penguins prohibitive favorites to not only win the Atlantic Division title, but make a long and prosperous run this spring.