Can the Penguins survive an extended period without Sidney Crosby and Evgeni Malkin? The fact that they are just average without them screams a resounding no. 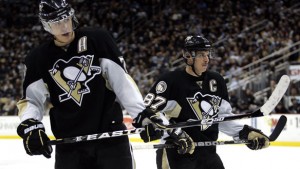 Those pieces, spearheaded by Sidney Crosby and Evgeni Malkin, are able to lock together to form a well oiled machine that is capable of creating copious amounts of offense. That machine is also able to limit the offense that is attacking from the other side.

Remove one of Crosby or Malkin from the mix and you still have the ability to trot out two lines that can compete, take them both out of the equation and you get an intimate look at the lack of top six talent that this team actually has.

In devoting so much money to the three center model that the Penguins employ, general manager Ray Shero has been forced to built his team with middling talent that is more adept at checking the opposition’s top line, than it is at scoring against it. Make no mistake… that talent has proven that when paired with one of the world class centers mentioned above, it has the ability to rise up. However, standing on its own, it is just average.

The Penguins proved just how average they could be minus their superstars on Thursday night in New Jersey. Sure they still had Jordan Staal, but matching ones top checkers against him limited his impact on the game. Mix in the fact that Mark Letestu, Max Talbot and Craig Adams can’t come close to matching what Crosby and Malkin bring to the table and you have a recipe for Thursday’s outcome – a 2-0 loss to a lesser opponent.

It is worth noting that they Penguins might be able to adapt to playing without their star centers, at least in the short term, as they have had very little experience in playing without them both. Before Thursday evening, the Penguins hadn’t iced a unit that didn’t feature one of Crosby or Malkin since 2006 – a span of 437 straight games.

Does a unit that lacks the punch of 87 and 71 need to play the game a different way?

That is up to Dan Bylsma to decide, but something will have to change, as they are going to have a tough time treading water until their stars get back if they are unable to score even a handful of goals in their absence.

In a perfect world, the team will only have to get through another week and a handful of games before getting one or both of their stars back. At least we can hope so, because this group is just average without them.