The Pittsburgh Penguins have recalled defenseman Ben Lovejoy from Wilkes-Barre/Scranton of the American Hockey League.

With the injury to Jordan Leopold, the Penguins have recalled defenesman Ben Lovejoy from their Wilkes Barre-Scranton affiliate. Though the Penguins do have Jay McKee at their disposal, Lovejoy is similar in style to that of Leopold. Lovejoy gives Dan Bylsma some options, though conventional wisdom says that McKee will head in…

Here is the official release… 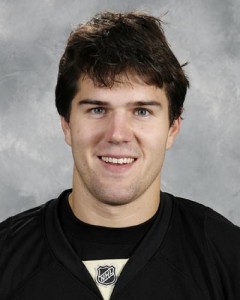 The Pittsburgh Penguins have recalled defenseman Ben Lovejoy from Wilkes-Barre/Scranton of the American Hockey League, it was announced by executive vice president and general manager Ray Shero.

Lovejoy, 26, has appeared in 12 games with Pittsburgh this season, compiling three assists and an impressive plus-8 rating. He recorded his first NHL point with an assist Nov. 14 at Boston. Lovejoy, who made his NHL debut last season after seeing action in two games with Pittsburgh, finished with a plus or even rating in 11 of his 12 contests this campaign.

The Concord, New Hampshire native has appeared in 37 playoff games with Wilkes-Barre/Scranton, helping the club to the Calder Cup Final in 2007-08. He has registered three goals, 11 assists and 14 points in his postseason career.