Well, Game 4 is in the books and the Penguins have taken a commanding 3-1 lead in their best-of-seven series with the Tampa Bay Light. Another game means another set of queries for our good pal Jon Jordan of the epic Beasts of the SouthEast blog at Kuklas Korner.

We cover a lot of ground in this set of questions and answers (my answers to JJ’s q’s will be linked soon) hopefully it covers some of the questions that you all had in mind following the double overtime thriller last night.

Let’s get right to it… 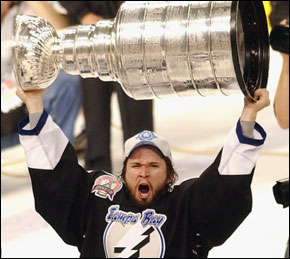 BM: The Lightning managed to score 241 goals during the NHL’s regular season, good for 8th in the league. However, now that the playoffs are four games old, they are looking like a team with a serious lack of scoring depth. They have scored just nine goals in the series, four of which came from the blade of Marty St. Louis. It is also worth noting that if you remove the fact that they put up five during a Game 2 victory, they have scored just four in the remaining three games. How big a concern is that lack of production moving forward in the series? Have Marc-Andre Fleury and his defense been that good?

JJ: It’s huge, Metz but you have to give credit where credit is due. Fleury has been excellent and the Penguins, as a team – not just the defensemen, have clamped down with the lead. Of course, in games three and four, the Lightning willed their way to tying things up, but they had to rely on relentless individual efforts to do so, particularly last night, and probably exhausted themselves in the process. Pittsburgh has now scored the first goal of the game three times in the series and, voila! They’ve won all three times. You can’t come back all the time and the Lightning have got to have better starts, period.

As for scoring depth, as you pointed out, save for game two and Sean Bergenheim last night, what scoring depth? After Marty’s four, the Lightning have not a player with more than a single goal; five with one apiece. Mattias Ohlund’s goal was an empty-netter. Take out that and Eric Brewer’s game two tally, and you have three goals from forwards not named Martin St. Louis in four games.

That’s just not getting it done.

Aside from Steven Stamkos’ gargantuan goose egg, I’ve been calling for some offense from the role players – the Bergenheims, the Adam Halls, the Dominic Moores – those types that a team needs to contribute for playoff success (much like Arron Asham is doing outstandingly for the Pens). Bergenheim came through last night but where is everyone else? This is a team game and this team has plenty M.I.A. right now, especially in terms of offense.

BM: Dwayne Roloson made 50 saves during Game 4 and was masterful in giving his team a chance to win the game. However, a case could be made that all three goals that beat him were a bit leaky. (though the second from Asham was deflected) It seemed as if he was giving up an inordinate amount of rebounds last night and the announcers made several comments about noticing him having trouble controlling the puck with his catching glove. Is he starting to wear down? Having an equipment problem?

JJ: It’s hard to say what the deal is with Roli right now. He won’t make any excuses and folks who enjoy the easy out will irresponsibly point to his age as a factor. It isn’t. He just hasn’t been great.
That said, as I wrote this morning at KK, the fact that he was the Lightning’s best player intermittently last night doesn’t take away from exactly what you’ve reiterated here: All three goals were iffy. Even so, none fall solely on Roli’s shoulders.

Tyler Kennedy was allowed to walk freely down low for a scoring chance from the circle – but Roloson needs to make that stop.

Asham’s goal was deflected, yes, but the point shot from Ben Lovejoy just prior was kicked out right through the slot to the high circles and onto Asham’s stick – a bad rebound, no matter how you look at it. In fairness, before the Lovejoy shot, the Lightning had about 43 chances to win a puck battle and get out of the zone and didn’t. 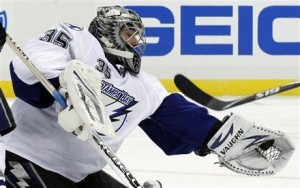 And the James Neal goal… Well, what more can you say about that one? That shot can’t EVER go in. EVER. But even that one was preceded by an intentional offside on the Lightning, repeated failure to clear the zone and an icing call before Neal had the opportunity to shoot.

There were consistent mistakes on the part of the home squad last night, as a whole.

Unfortunately for Roloson, three of those mistakes, at least in part, will be remembered far more than any other.

BM: There were a couple more inquires that I had in mind, however I will shelve them in favor of this gem that is on everyone’s mind… can the Bolts do it? 3-1 is a large hill to climb… I know we discussed this possibility on Tuesday evening during the podcast and the fact that comebacks in this situation seem to happen a bit more often, but based on what you have seen can they make it a reality? My guess is no, especially considering that the Penguins have seemingly taken the advantage not only in games, but in play on the ice…

JJ: After what I saw last night, I’d call it unlikely, at best. In fact, I don’t necessarily even see this series coming back to Tampa, unless the Lightning make some serious changes.

Maybe getting on the road will help them. After all, that’s where they’ve played their best game and, more importantly, had their best start in the series so far.

In game three, they were jumpy out of the gate and mistakes cost them. In game four, they weren’t juiced enough and it showed. Moreover, I couldn’t even believe I was seeing a playoff game in the first period last night any time I was focusing on what the Bolts were doing. If I didn’t know any better, I might have thought this was a game against Atlanta on a Tuesday night in December. (No offense, Atlanta.)

Of course, I’m sure that wasn’t the case. Rather, I think there was some overcompensation on the part of many not to be as fired up as they were in game one. But you can’t find the right emotional level that way. I don’t even think you can do it consciously. That’s where the “feel for the playoffs” comes into play – something the Penguins, as a team, already have and something that this Lightning group is learning on the fly right now.

The lesson had better take in short order, if they’re even going to get this series back to Tampa on Monday. And even if that does happen, there’s not a lot from games one-four suggesting to me that this team can win in Pittsburgh, come home and win again, and win in Pittsburgh one more time in a game seven, all in a row.

A dominant performance in game five, even, wouldn’t change much about that.

Don’t count them out completely, though. Never count out Guy Boucher’s bunch. I thought they were dead or dying at several points in the regular season and he always worked some kind of magic to keep them going.

But it will take a Houdini-like maneuver on his part, however, to get them out of the trap they’re in now. There’s no doubt about that.