Dan Scifo took in the Pens/Isles affair last night at the CEC and gives us a thorough recap of the events.

PITTSBURGH — Not even a surprise goaltender switch in the shootout could keep Evgeni Malkin from rallying the Pittsburgh Penguins past the New York Islanders.

Malkin figured in on the game-tying goal and scored the lone marker in the shootout as the Penguins won for the first time in almost two seasons when trailing after two periods, defeating the Islanders, 3-2, in a shootout Thursday night at Consol Energy Center.

“I think he’s feeling good, feeling strong, and I think he was disappointed, having to take a few games off,” said forward Chris Kunitz, who started the rally with the Penguins’ first goal early in the third period,“He really wanted to get back in there and help the team and right now it’s nice to have him back in the lineup.”

Malkin sat out seven of the Penguins’ first 10 games of the season with soreness in his surgically repaired knee. He missed five straight before returning during a 3-0 victory at New York on Tuesday, the first game of the home-and-home series between the two clubs.

Malkin scored the deciding goal in the shootout, beating New York Islanders’ goaltender Rick DiPietro, who, despite not playing a minute this season, relieved starter Evgeni Nabokov after he made 30 saves through regulation and overtime.

“It surprised me…it surprised the whole team,” Malkin said. “Nabokov played a great game. I don’t know why they changed.”

But it didn’t matter to Malkin, who dodged DiPietro’s poke check and slid the puck underneath the sprawled Islanders’ goaltender for the lone shootout goal.

“He’s got great moves,” said Penguins’ head coach Dan Bylsma. “He shows those off in practice and tonight was a spectacular move because he had to change after the poke check from DiPietro.”

Penguins’ goaltender Marc-Andre Fleury, who made 17 saves, stopped all three he faced in the shootout, making the deciding save with a poke check on former No. 1 pick John Tavares. 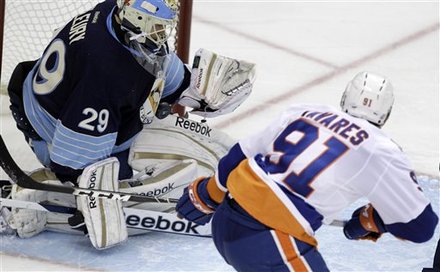 The win was the fifth straight for Pittsburgh, but it didn’t come without its tense moments as the Penguins rallied for the first time when trailing after two periods since April 3, 2010 against Atlanta.

“They scored a big goal right away in the third and I think we had a good shift in their zone and responded well,” said Penguins’ forward Pascal Dupuis. “(Kunitz) had a big goal to get us back to a goal and the power play came up big.”

The two teams combined for three goals in the first 4:15 of the third period after scoring just one in 40 minutes, but it was two goals in 2:46 that forced the shootout.

Matt Martin gave the Islanders a 2-0 lead 45 seconds into the third, sliding the rebound from a Steve Staios shot underneath Fleury’s right leg.

“We didn’t feel like the game was getting away from us with the one-goal lead, but as soon as they scored the second one, we hit the panic button maybe a little more to pick up the tempo,” Kunitz said.

Kunitz set the tone with his third of the season 44 seconds later as the Penguins, after outshooting the Islanders, 21-9, through two periods, finally cracked the scoreboard.

Dupuis poked a rebound from Kris Letang’s shot across the crease to Kunitz, who dumped it behind Nabokov.

“It was a great play by (Letang) to direct the shot toward (Dupuis), who was standing to the side of the net,” Kunitz said. “(Dupuis) did a great job of battling and I pushed off a guy, got the puck in the blue paint, and pushed it into the net.”

Penguins’ forward James Neal tied it with his ninth of the season, scoring a power-play goal following a sharp tic-tac-toe passing series.

“It was a great goal at the perfect time,” said Neal, who is tied with Toronto’s Phil Kessel for the league lead with nine goals.

Kunitz, after taking a point feed from Malkin, one-touched a pass to Neal along the goalpost, who blasted it by Nabakov.

“The power play had been effective for us all night and it cashed in when we needed it,” Bylsma said.

It was the Penguins third straight game with a power play goal, a 4-for-14 stretch, after struggling at 2-for-22 earlier in the season.

Penguins’ forward Jordan Staal appeared to give the Penguins an early lead midway through the first on a power play goal. But the goal was called back after Matt Cooke was whistled for incidental contact with Nabokov.

Kyle Okposo redirected Mark Streit’s pass from the point between his legs to Nielsen, who pushed the puck past Fleury to give the Islanders a 1-0 lead.

The Penguins outshot the Islanders, 13-2, in the second period, but still had nothing to show for it.

Again, Staal had the best chance two minutes into the period with an inside-out move, from his backhand to the forehand at the top of the circle, but he hit the post.

Things changed early in the third though.

“The two quick goals changed the momentum of the game, especially getting a power play goal,” Kunitz said.

NOTES: The Penguins, 8-0 when scoring at least three goals, have not allowed more than three in a game this season…The Penguins, who are 17-2-2 in their past 21 games against the Islanders, have won 12 straight home games against New York, which dropped its fourth straight and hasn’t won in Pittsburgh in nearly four years. The Islanders have been outscored 49-19 during that span.

***In addition to his work here at FTP, Dan Scifo is the Assistant Sports Editor for the Latrobe Bulletin.