Dan Scifo gives us his take on last night’s shocking come from ahead loss to the Philadelphia Flyers.

PITTSBURGH — It was déjà vu all over again for the Pittsburgh Penguins.

Only this time, the Penguins blew a lead against their rivals from Philadelphia at the worst possible time.

Daniel Briere notched two goals and Jakub Voracek made his playoff debut in grand fashion, scoring 2:23 into overtime to cap a ferocious come-from-behind effort that saw Philadelphia rally from a three-goal deficit to knock off the Penguins, 4-3, in overtime in Game 1 of the Eastern Conference quarterfinals Wednesday night at Consol Energy Center. 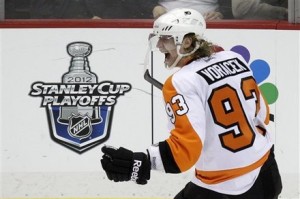 “They did what they’ve done all season, or at least shown what they can do, which is keep coming back from deficits,” said Penguins’ head coach Dan Bylsma.

Philadelphia has done that that repeatedly to the Penguins, including three times in the last four weeks alone where the Flyers rallied from at least two goals down to knock off their Keystone State counterparts.

This time, they came back with four unanswered goals after the Penguins scored three times during a dominating opening period.

“Sometimes things like that happen,” Penguins’ captain Sidney Crosby said. “It doesn’t matter whether it was overtime or we lost 10-0.

“We lost, so we have to fix the things that need to be fixed and make sure we’re ready for the next one.”

The Penguins won’t have too much time to wait for the next one. Game 2 is Friday (7:35 p.m.) at Consol Energy Center. How quickly the Penguins can get over this one, especially after they were ahead by three goals, remains to be seen.

“We were up 3-0, but it doesn’t mean they weren’t going to score,” Crosby said. “They had a lot of hockey left to get back into the game, but we probably made it too easy on them.”

The Penguins made it look easy in the opening period, scoring three times on 13 shots, including twice in the first 7:49 of the game.

Crosby notched his first playoff goal since May 10, 2010, scoring 3:43 into the game after he snuck a backhand rebound over the shoulder of Flyer’s goaltender Ilya Bryzgalov. 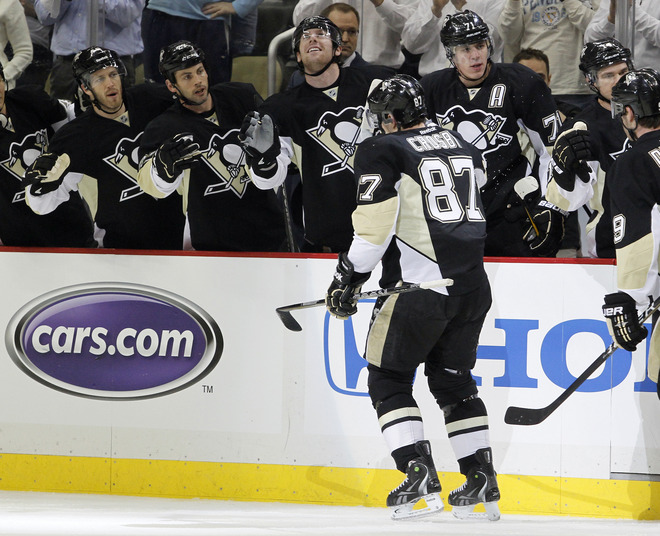 Tyler Kennedy followed it up 4:06 later, one-timing a backhand feed from Jordan Staal behind Bryzgalov during a two-on-one rush, triggering a timeout from Flyers’ head coach Peter Laviolette.

“It was a loud building,” Laviolette said. “It was a completely different environment from anything we’ve been used to all year. We had not seen that type of energy in a building all year and you could tell it was playoff hockey.

“We did too much standing around…too much watching in the first period.”

Pascal Dupuis, who finished the season on a 17-game point-scoring streak, carried his scorching play into the playoffs and extended the Penguins’ lead to 3-0 with a goal in the final minute of the first. Dupuis, in front of the net, got a piece of a between-the-legs feed from Steve Sullivan behind the net following a high chip off the boards from Crosby.

Penguins’ goaltender Marc-Andre Fleury, who stopped 22 shots, was sharp early, coming up with a spectacular right pad save on a Scott Hartnell one-timer in addition to denying former Penguin Jaromir Jagr on a breakaway midway through the first.

His counterpart, Bryzgalov, settled down after the rough start to stop 25 shots, including the final 15 he faced.

And that, in addition to a controversial goal, helped the Flyers, who won an NHL-best 20 games when the opposing team scores first, slowly crawl back into the contest.

Television replays showed Briere was offsides when he got the Flyers on the board at 6:22 of the second, going top shelf over a sprawled Fleury on a partial breakaway.

“I think the linesmen are going to wish that one was a little closer than it was when he sees it again, but it’s not why we lost the game,” Bylsma said.

Game 1 wasn’t the “bloodbath” that Hartnell predicted, and there certainly wasn’t a 10-man brawl like the regular-season meeting two weeks ago that had coaches from both sides yelling at one another. The post-whistle activities were at a minimum, too.

But the Penguins’ power play, a lingering source of frustration from last year’s playoff loss against Tampa Bay, still had opportunities to potentially put the game away, leading 3-1, but couldn’t convert.

That allowed Briere, who missed the final week of the regular season after taking a hard hit from Penguins’ forward Joe Vitale — the open-ice check that triggered the 10-man brawl during a 6-4 Flyers’ win on April 1 — to pull Philadelphia within one midway through the third. Briere, who has 17 goals the past two postseasons, threw a seemingly harmless looking shot at the net that snuck behind Fleury, making it a 3-2 game.

Brayden Schenn, acquired in a trade for former captain Mike Richards, tied it with a power-play goal 3:06 later, redirecting Hartnell’s shot past Fleury. 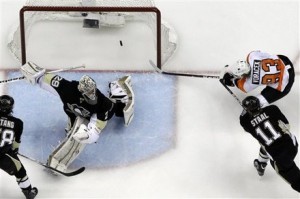 From there, the Flyers dictated the tempo, through the third period and into the overtime where Voracek ended it, putting the rebound from a shot from the point behind Fleury.

“We have a certain identity we have success with and we know we can score goals,” Laviolette said. “We know we can win hockey games playing a certain style and a certain brand.”

Philadelphia, which took four of six regular-season meetings against the Penguins, has felt right at home at Consol Energy Center. The Flyers are 6-1 in the Penguins new arena since it opened in October 2010, their lone loss coming last week during an essentially meaningless regular-season finale.

This one, however, spoiled Crosby’s playoff return, a tumultuous struggle for the Pens’ captain that saw him play his first post-season game after a 15-month battle with concussion-like symptoms.

Crosby, who has two goals in his last nine playoff games, still stood out, with a goal and an assist Wednesday and 17 points in his last 12 playoff games against the Flyers, but it was supposed to be a celebration for Pittsburgh, playing with a full complement of stars since a stunning upset against Montreal in the 2010 Eastern Conference semifinals.

Now, they find themselves, full roster and all, trailing, 1-0, in a best-of-seven series after their rivals from Philadelphia completed yet another stunning come-from-behind victory.

“They’re not going to quit,” said Penguins’ forward Craig Adams. “We knew that, but we just didn’t play well enough.”

NOTES: The winner of Game 1 in the last four series involving the Penguins has gone on to lose the series…The Penguins, during the Crosby-era, are 6-2 in series in which they have home-ice advantage…Wednesday’s game was the first-ever playoff overtime game at Consol Energy Center…Dupuis, a healthy scratch for eight games during the 2009 post-season, scored his first goal in 23 home playoff games…Prior to Game 1, the last time the Flyers won a playoff game in Pittsburgh came in 2009 when current Penguin Arron Asham scored the game-winner during a 3-0 victory…It’s the Penguins’ first Game 1 loss at home since 2010 against Ottawa and first Game 1 that went to overtime since the 1998 playoffs.