Sidney Crosby has already been handsomely paid for product endorsements since entering the league back in 2005-06. One company he has partnered with is looking to extend their relationship. 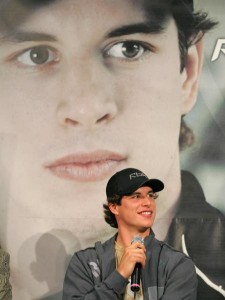 Sidney Crosby has already been handsomely paid for product endorsements since entering the league back in 2005-06. He has deals in place with Gatorade, RBK, Tim Horton’s, and Bell. One of those companies is in the process of extending their deal with the Penguins’ captain and it could be the richest ever signed with an NHL player.

Ken Campbell of the Hockey News is reporting that Crosby and Reebok are close to a 10 year deal that would pay the superstar roughly $1.4 million per season or $10 million over the next 7 years. Here is the report.

Multiple sources have confirmed to THN.com that Pittsburgh Penguins superstar Sidney Crosby is on the verge of signing the richest endorsement deal in NHL history.

Crosby’s new deal with Reebok is said to be worth almost $10 million over the next seven years. Crosby’s agent, Pat Brisson, would not discuss the financial aspect of the deal and said it is not completed yet, “but things are going in the right direction.”

Sources say the deal is for between five and seven years and will pay him $1.4 million a season. That would make Crosby easily the highest-paid player ever in terms of endorsements. Considering Crosby also has endorsement deals with Bell, Tim Hortons and Gatorade, it’s guaranteed the new deal would pay him in endorsements alone more than the NHL’s average salary of $2.1 million.

And it appears Reebok has very big plans for Crosby that go beyond endorsing hockey equipment. The company already has an SC87 apparel line and is using Crosby in its campaign for its new Zig Tech shoes.

Crosby has been endorsing Reebok since he entered the league in 2005-06.

This is great news for Crosby…and maybe the Penguins. When a player is making so much from his endorsements, in this case more than the NHL’s average salary, he is more apt to take home town discounts on future deals. It will be interesting to see how Crosby’s next contract negotiation goes.