Paul McCartney, who hadn’t played in Pittsburgh in 20 years, was the act who was selected to open up the CONSOL Energy Center on consecutive evenings. 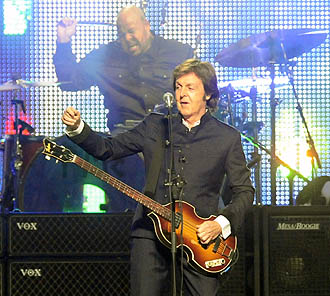 Paul McCartney, who hadn’t played in Pittsburgh in 20 years, was the act who was selected to open up the CONSOL Energy Center on consecutive evenings. Both of the performances sold out in minutes and people were obviously anxious to see both Sir Paul and new building in action. We were no different…

We arrived in our usual parking spot at roughly 5:40pm and headed up to the building, as the doors were scheduled to open at 6:00pm. Unfortunately that wasn’t the case based on a travel snafu that sprung up for Paul McCartney. His plane was late arriving in Pittsburgh, thus pushing back his arrival to the venue. He still needed to do all of his show preparations including the sound check, which was still going on at 6:00pm.

While people stood in line belly aching about not being able to get in the building I was receiving text message updates from a friend on the inside (@kicksavetwenty).  He was messaging things like: “He just did Penny Lane” “Everybody Dance Tonight” “Yesterday!!” and finally when Paul finished his sound check “This has been an awesome concert. lol.” 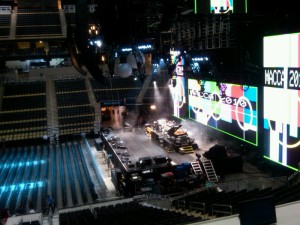 Soon thereafter we were on our way through the Trib Total Media entrance and en route to our seats. I heard a few complaints from folks about how unorganized things seemed, however that had a lot more to do with 18,000 rookies making their way into the building for the first time than it did the staff of the arena. In fact, I thought things seemed very organized… keep in mind that much of this crowd wasn’t only hitting the CONSOL for the first time, but didn’t seem to be all that familiar with how things would have worked across the street at the Civic Arena either… one comment summed up the arena/concert experience of many.

“I remember when you used to be able to bring a full cooler into Three Rivers Stadium,” said one gentleman behind us. 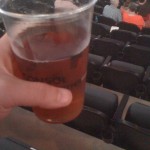 Once we navigated the crowd in the “lobby” we were heading up the escalator to the 100 level where our seats were located in section 106. We hit the concessions to grab a quick snack and an icy cold Yuengling draft before heading to the seats. My first thought was… WOW! It took a moment to get my head around the fact that we were sitting in an arena that we weren’t sure we would get five years ago for an actual event… not to mention that the event was potentially a once in a lifetime. It isn’t like McCartney comes around these parts all the time…

The crowd’s electricity grew as the show start time was pushed back a bit from the original 7:30 start time due to the earlier delays. Eventually the dual video screens on each side of the stage came to life with a scrolling history of Paul McCartney featuring classic shots of he and the Fab Four, buttons, pins, and moving “photos.” That generated quite a buzz and the crowd was good and lathered up when Sir Paul finally hit the stage with “Venus and Mars/Rock Show.”

From there McCartney was off and running and blew through 2 + hours of material. He played a massive 39 songs, 22 of which came from the Beatles catalog. The great thing about it was that most of those Beatles songs were from later in the bands career. Those expecting to hear a ton of the “early stuff” might have been disappointed, but for the true aficionado, you were very pleased.

McCartney the showman was in rare form as he interacted and joked with the crowd throughout.

“What do you think of the hall?!,” McCartney said at one point. “It’s a nice place to play.” 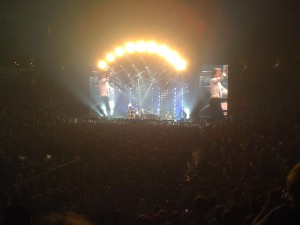 And it nice place it was. The building’s acoustics sounded great, much better than those of the Civic Arena, which had a reputation for being very echoy. It also helped to have such a pro on the stage, as McCartney and his band played perfect versions of each tune that they performed. They had the CONSOL crowd interacting and singing along throughout on “Ob-La-De, Ob-La-Da”, “Let It Be” and “Live and Let Die.”

McCartney paid tribute to his wife Linda, his former Beatles band mates George Harrison and John Lennon and seems to have made peace with what has been one of the most amazing careers in music history, one that spans half a century.

Overall, the evening couldn’t have possibly gone better and we were thrilled to have been a part of it. When it was all said and done, the CONSOL Energy Center was officially open and Paul McCartney had blown the roof off of the place.

Though most of us will be spending most of our time in the building watching hockey, it was a pretty special thing to be there for the show last night. McCartney plays the second of his kick-off shows this evening at the CONSOL Energy Center…