The Penguins have acquired Alex Kovalev from the Ottawa Senators… 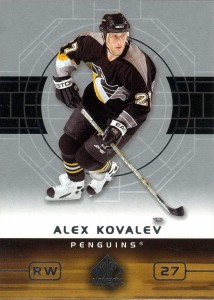 Ray Shero stated that he was still looking to bring in another forward and he appears to have done that in the form of former Penguin Alex Kovalev. Kovalev had been rumored to Pittsburgh for the better part of three weeks, with Kevin Allen of USA Today being the biggest proponent of the move.

The Senators seemingly freed themselves up to make the deal by claiming Marek Svatos off of waivers this morning from the Nashville Predators.

The rumored deal that had been floating around over the past few weeks seemed to call for a fifth round draft pick from the Penguins, but Ray Shero being Ray Shero he found a way to make it happen for much less – a seventh round pick in next summer’s draft.

Whether Kovy can reclaim his former Penguins’ glory is unknown, but it is worth noting that he had some of his finest seasons as a pro skating with a flightless bird on his chest. Kovalev’s best season came in 2000-01 when he scored a career high 44 goals and 95 points with the Penguins.

Though this isn’t a move that puts the Penguins in contention for a Stanley Cup, it is one that I absolutely love for the pure nostalgia of the situation. Maybe, just maybe, we will get one more chance to see one of our former heroes moonwalk again!

More on this move soon…