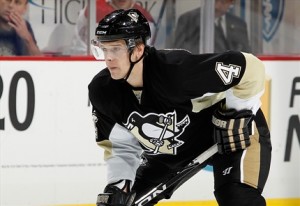 The Penguins finished the night the way it began — with a trade.

Zbynek Michalek was sent back to the Phoenix Coyotes in exchange for prospect Harrison Ruopp, goaltender Marc Cheverie and a 3rd-round pick this year (81st). Five of the Penguins remaining seven draft picks will fall into rounds 2 through 4. This is definitely going to be a year for restocking the cupboard.

Penguins general manager Ray Shero was on the draft floor for close to a half an hour consummating the deal with Yotes’ general manager Don Maloney. The two were in deep conversation throughout the last few draft picks and finally came to an agreement.

Ruopp was a third-round pick of the Coyotes at last year’s draft. The 19-year-old played for the Prince Albert Raiders of the Western Hockey League last season.

Cheverie, 25, split his time last season between Gwinnett of the ECHL and the Portland Pirates of the AHL. He was traded from the Florida Panthers organization to Phoenix at the beginning of last season.

In moving Michalek and Jordan Staal this evening, Ray Shero opened up roughly $8-million dollars in cap space and many feel he will be a player in terms of some of the bigger names that are on the board come July 1st.

The wheeling and dealing may not end here either, as it seems that there are still several lines in the water, which should make for an interesting day tomorrow as the draft resumes at 10:00am EST.