The Penguins have acquired goaltender Tomas Vokoun from the Washington Capitals in exchange for a seventh-round pick in the upcoming NHL Entry Draft. 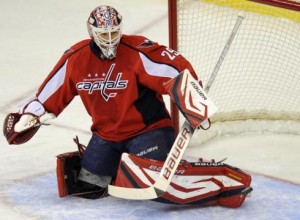 One of the areas that many around the National Hockey League identified as a key need for the Pittsburgh Penguins as they headed into the trade deadline back in March was that of a back-up goaltender and they have finally answered those calls by acquiring the rights to Tomas Vokoun from the Washington Capitals for a seventh-round pick in the 2012 Entry Draft.

Brent Johnson, the team’s back-up over the past three seasons, surrendered 3-or-more goals on nine occasions during the ’11-‘12 season and many felt that he got a little too old, too injury prone and too porous way too quickly, which seemed to take him out of the team’s future plans.

The historically reliable Johnson posted a 6-7-2 record, 3.11 goals against average and .883 save percentage in 16 appearances through the team’s regular season schedule.

The team was also hoping that youngster Brad Thiessen would be able to slide into a more prominent role, but he quickly showed that he is not quite ready for regular playing time in the league posting a 3.72 goals against average and a .858 save percentage. He did post an impressive 3-1-0 record, but that was helped largely by the 15 goals the Penguins’ offense posted in his victories.

The 35-year-old Vokoun became expendable in Washington after Braden Holtby emerged and assumed the No. 1 job in leading the Capitals to Game 7 of the Conference Semi Finals.

This move should give Marc Andre Fleury a very viable back-up, who is capable of starting 20-plus games per season. Vokoun also provides the Penguins with a very capable starter if Fleury should suffer an injury.

The Penguins have already inked Vokoun to a 2-year, $4-million dollar contract.

The only draw back here is devoting $2-million per season to a back-up goaltender, but the potential positives far outweigh the negatives. Having a reliable goaltender that can alleviate pressure on Fleury, while at the same time being able to step in and play large chunks of games if a need were to arise makes it well worth it.