The Penguins have signed forward Arron Asham to a one year, $700,000 per year deal. Ray Shero announced the deal late this afternoon… 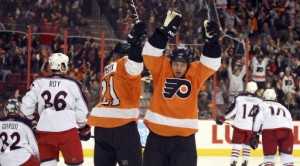 Ray Shero has been pretty quiet since the first day of unrestricted free agency when he locked up Paul Martin and Zbynek Michalek. Truth be told, Shero has a history of grabbing a couple free agents and sort of laying in the weeds until the dust settles, which is what he has done again this year.

Shero sat back, watched and waited to see how things were going to play out and then pounced on a player that he felt could help his team at a price that is beneficial to his salary cap, Arron Asham. Asham was an important part of a Flyers team that made an appearance in the Stanley Cup Finals last season.

The Manitoba native is a player that very much intrigued me until the team re-signed Matt Cooke. He brings a similar game and could have been a cheap replacement had the Penguins needed one. Bringing Asham in now is a bit of a surprise, but I can still see the value in the signing. He can play a variety of roles and has some finishing ability. It will be interesting to see how Dan Bylsma chooses to use the feisty forward.

Though some folks are not thrilled with the signing, it makes the Penguins tougher to play against. He is full of piss, vinegar and my favorite attribute – heart. I have often said that Dan Carcillo could have learned an awful lot from Asham, as they are similar players, but Asham possesses the ability to stay in control. Make no mistake, this is a signing that will be appreciated down the line.

Here is the release from the team…

The Pittsburgh Penguins have signed forward Arron Asham to a one-year contract, it was announced today by executive vice president and general manager Ray Shero.

Asham (5-foot-11, 205 pounds) played with the Philadelphia Flyers the past two seasons. He posted 24 points (10G-14A) and 126 penalty minutes in 72 games in 2009-10. Asham chipped in a career-high four goals and seven points in 23 contests in the playoffs to help Philadelphia win the Eastern Conference title and earn a berth in the Stanley Cup Final for the first time since 1997.

Asham, who was originally drafted by Montreal in the third round (71st overall) of the 1996 NHL Entry Draft, is a 10-year NHL veteran who has played for Montreal, NY Islanders, New Jersey and Philadelphia. The physical forward has played in 648 games in his career, totaling 82 goals, 97 assists, 179 points and 818 penalty minutes. Asham has appeared in 52 playoff games and tallied 13 points (6G-7A) in his career.