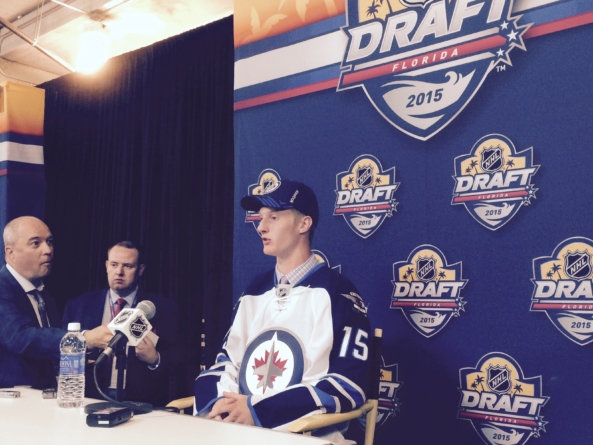 It started in a backyard rink that was built by his father and it culminated in Kyle Connor being selected by the Winnipeg Jets with the 17th pick of the NHL Draft on Friday night.

“It was my dad,” Connor said of what inspired him to get into the game. “He was really influential on my career and kind of showed me the game and built rinks in my backyard and go out there and play. That’s kind of how I got started.”

Those are humble beginnings for an 18-year-old that was named USHL player of the year after rolling up 34 goals and 80 points in just 56 games for the Youngstown Phantoms.

He is the first Phantoms’ player to ever be selected in the first round of the NHL Draft and for good reason. He helped the Phantoms reel off 23 wins in 25 games, including 17 straight to set a new USHL record. He credits the USHL and the challenges it provided with helping his game develop on and off the ice.

“It’s helped my development,” Connor said. “[It was] extremely important to my development. Every night in the USHL it’s a different team that can win. Its such a competitive league. It grew me as a person and a player.”

He made a commitment to join the University of Michigan next season and unlike second overall selection, Jack Eichel, he let the cat out of the bag and announced that he will honor that commitment and join the Wolverines.

That doesn’t mean that he isn’t elated to have been selected by the Jets, who he dubbed a “great team.”

He is planning to spend a few days in Florida with family and friends before getting into his offseason training regimen. That is a priority since he wants to improve his strength a bit before taking the next step.

“I want to work on my strength,” he said. “I’m going to the University of Michigan and that will definitely be a part of that. I’ll look to put on a little weight.”

He has taken the next step and knows that he will be playing NCAA Division I hockey next year, but he seemed very excited about the opportunity to join the Jets.

Aside from the cold, that is.

“It’s cold up there, but they’ve got passionate fans,” Connor said. “It’s a real passionate hockey market as well.”

He said that the he had talked with the Jets a handful of times throughout the season, so he wasn’t shocked to see them select him. That didn’t make the wait any easier for him as he slipped out of the top 15 selections, but he made the best of it.

“it’s a little nervous,” Connor said of the feeling of waiting around. “It’s out of your control and you know you can’t do anything about it. You gotta try to have some fun with it.”

His game is one that he described as full of speed and skill. He is also capable of slowing the game down when needed.

Connor is the kind of game breaking forward that will compliment the already gifted core in Winnipeg. Especially once he bulks up a bit, which will come over the next few years.

The beginnings might have been humble in that backyard rink built by dad, but Connor was thrilled to have gone through the entire process that lead to Friday night in Florida.

“It’s an unbelievable feeling. To share this with my family and friends who supported me throughout my whole career and given me so much support. It’s exciting.”

Connor knew that he had a chance to compete at the next level shortly after arriving in Youngstown.

“When I went to Youngstown and saw junior hokey and the USHL we made the playoffs that year. We had a successful year and it was kind of around there.”

His favorite player and one that he’s modeled his game after – Pavel Datsyuk of the Detroit Red Wings.

“He’s so creative with the puck.”