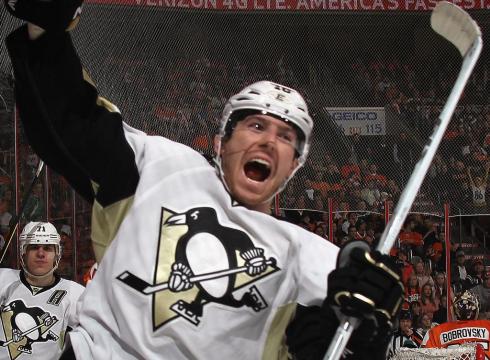 Rumors of James Neal being on the move sparked up a couple of months back. They were so loud that the player took to his Twitter account to debunk talk that he asked to be moved out of town. However, there was no denying it when Gary Bettman took the podium in Philadelphia to announce that former 40-goal winger was on his way to the Nashville Predators.

“I think we were just trying to change the mix of our team a little bit and get a little different type player,” Penguins’ General Manager Jim Rutherford said from the draft floor following the deal.

The player he is referring to is 27-year-old Patric Hornqvist, a 5-foot-11 winger from Sollentuna, Sweden.

Hornqvist, who weighs in at 189 pounds, put up a career high 53 points (22 goals) in 76 games last season for the Predators.

“Hornqvist plays with an edge, goes to the net, works the corners,” said Rutherford. “We like his all around play.”

While he has been streaky at times during his career, he can be very effective. He isn’t shy about going to net, plays with the edge that Rutherford mentioned and has never skated with talent along the lines of Sidney Crosby or Evgeni Malkin.

While he is no Neal, he is a skilled player who should be a productive player for the Penguins.

One cannot talk about moving Neal without addressing how the move might affect Evgeni Malkin. That was something that Rutherford considered before pulling the trigger on the deal.

“You’re always concerned about that with your top players,” said Rutherford. “He’s played with lots of top players and by doing this it gives us a better chance to do something no July 1st that may be suitable to Geno too.”

While Rutherford would not reveal much about who he might have in mind it very well could be Malkin’s former Magnitogorsk teammate Nikolai Kulemin, who is set to hit the open market as an unrestricted free agent on Tuesday.

“I’m not going to throw out any names, but we think we’ll get somebody that will fit on his line,” said Rutherford.

While this move might not be received so well by Malkin, offsetting it with a Kulemin signing would go a long way towards smoothing that over.

The Penguins also acquired 25-year-old Nick Spaling in the deal. Spaling, who is regarded as a solid third line player and is capable of playing all three forward positions has also shown an ability to add some offense.

He recorded a career-high 32 points (13 goals) last season, six of which came on the power play. He logged 42 hits and blocked 32 shots on the season.

Rutherford admitted that he talked to about 15 teams about moving Neal, mostly answering their calls, but he settled on the Nashville offer. He also talked about the fact that this deal helped the Penguins cap situation.

While Hornqvist makes $750,000 dollars less than Neal, mixing in the $1.5 million dollar qualifying offer that Spaling was tendered actually leaves them with less money than they had yesterday.

There was plenty of talk about on the draft floor involving additional moves for the Penguins and if they truly intend to open more cap space, you have to assume that there will be, which has everyone anxious for tomorrow and Rounds 2 through 7.

Buckle up baby, it could get interesting.