The start of the playoffs is now just one day away, with the Penguins hitting the ice tomorrow night against the Ottawa Senators at Mellon Arena. 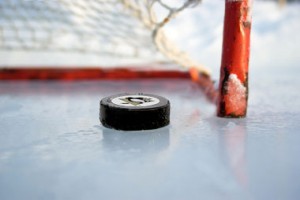 The start of the playoffs is now just one day away, with the Penguins hitting the ice tomorrow night against the Ottawa Senators at Mellon Arena. The big screen is being erected, the tailgates are set and the national and Canadian media is converging on Pittsburgh.

Though the hockey world has often turned its eyes towards Pittsburgh over the past three years, there seems to be even more national attention this time around. Everyone wants to see if they can “flick the switch” and turn around what has largely been a mediocre second half. They all want to see how the Penguins react to being the defending champions. At least one national hockey personality has picked the Penguins to repeat based on the strength of their three center model – EJ Hradek. Hradek’s column in the most recent ESPN Magazine touts the fact that this year’s playoffs are wide open, though in the end he picks the Pens to be the first repeat winner since 1998.

What do you folks think? I already know what you will say Evilpens… so for the rest of you guys…can the Penguins repeat?

While you contemplate that question, enjoy today’s around the net – your morning skate around the league!

First off this morning, here is a piece that Shelly Anderson did on Sidney Crosby… She goes through his big year, pointing out all he has accomplished and what he still hopes to achieve. Being prepared is the key for Crosby…

Success for Crosby means being prepared

I have joined Versus.com for the playoffs and maybe beyond…I will be blogging, hosting live game night chats and more. Here is the first piece I did for Versus, which goes hand in hand with Shelly’s piece above. Destiny is on Sid’s Side…

Destiny is on Sid’s Side

The mainstream media has caught up to the Plum High School lipdub that we posted last week. Here is a piece from the Tribune Review that has some reactions from Pens VP of Communications Tom McMillan, Pascal Dupuis and Max Talbot. They all loved it…good job kiddos!

The great Pensburgh blog has a translation of Marc Andre Fleury’s latest RDS.ca blog… Max Talbot also does a blog for RDS… which is essentially the French version of TSN. In this piece, Fleury talks about the Senators, the final night at Mellon Arena and being startled by a mouse!

Rob Rossi makes a case for Sidney Crosby and Jordan Staal to be amongst the NHL’s awards finalists this year. Can’t say as I disagree with him either… Crosby has clearly been vital to any successes that the Penguins have had this season, especially when you consider the “off-year” of Evgeni Malkin. Rob also feels that Staal should be considered for the Selke… he has quickly become a yearly contender for that award and could easily be on the ballot his season.

Crosby and Staal to be nominated for post season honors?

Mark Belko asks if the Mellon Arena is a road block. Many in the city feel that it is and that the building must go to allow a redrawing of the streets in the Hill District and a reconnection with downtown.

Will tearing down Mellon Arena reconnect the Hill District?

Entertaining read about the Canucks, but I am not sure I agree with the assessments of why the Pens, Wings and Sharks will fail. If the Penguins lose, it will be because of their inconsistencies…noting to do with the “Black Cloud” of Matt Cooke…

Why the Canucks have what it takes!

After a disappointing season, much change is expected for the Anaheim Ducks. If there was a silver lining to their ill fated campaign, it’s that they can give plenty of time to Scott Niedermayer and Teemu Selanne to decide if they are calling it a career…

A change is a coming for Ducks

The NHL announced its three stars for the final week of the NHL season… the recipients: 1. Sidney Crosby 2. Eric Staal 3. Nicklas Backstrom.

The rankings might have said differently last week, but a survey of ten NHL scouts told a different story, as seven of them selected Taylor Hall as the top prospect in this year’s draft.

The LA Kings, who took the league by storm during the first half of the NHL season, have been relegated to the role of underdogs… and they are loving it! This is not a team I would want to face in the first round of the playoffs…especially when you mix a healthy Ryan Smyth with Anze Kopitar…those two were lights out at times this year.

Reinsdorf even closer to Coyotes… his deal would keep the Yotes in Glendale. I can’t wait until this is resolved. Having seen this happen on far too many occasions with the Penguins, I know that the fans in Glendale have got to be sick…

Brian Burke is one of my favorite hockey people…he shoots from the hip and tells it like it is. He has been being raked over the coals for moving the Leafs number one pick for Phil Kessel this past pre-season…especially now that the pick could end up being the number one overall. I guess those folks in Toronto neglect to realize that the pick went into securing a 22 year old sniper that led their team in scoring after playing only half a season.

Toews being compared to many of the all-time greats

Though Rick Tocchet and Brian Lawton were very important to the maturation of Steven Stamkos this past season, the young sniper wasn’t surprised to see them dismissed. Showing a wisdom that is beyond his years, he realized that with the lack of success, these things happen.

Stamkos understands that changes were necessary