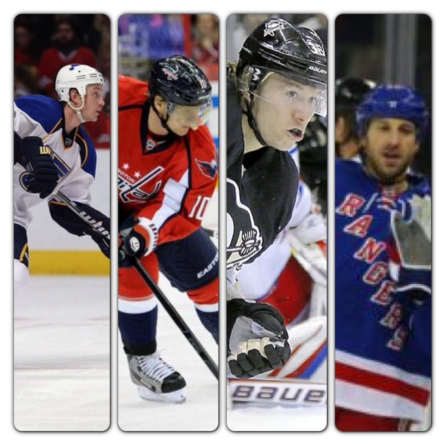 As most of you know, I am the co-host of PensWeek with Bob Grove on the Penguins’ Radio Network. The show airs on Saturday mornings at 9:00am.

We recap the week in Penguins hockey, discuss all current Pens news, talk with guests and I give you some MetzerMetrics. MetzerMetrics is a fantasy hockey segment that gives you some news, stats, insights and players you should be grabbing to bolster your line-up each week.

Since we started the segment, folks have contacted me to get the info via email or on Twitter/Facebook, since they might have been listening in the car or at work and weren’t able to take it all in. So, moving forward, we will be bringing you all of the MetzerMetrics info from each episode of PensWeek right here at From the Point.

Keep in mind that you can have your fantasy hockey questions answered and discussed by Grover and I live on the air by sending it to me via Twitter with the hashtag #MetzerMetrics.

This week’s MetzerMetrics focused on some players who found themselves on the move at the deadline last Wednesday and could have some pretty significant fantasy value down the stretch. Most of them are probably available on waivers in your league so you should keep an eye open for them.

Jokinen has scored 40 or more points five times in his career, but his role and status in the Hurricanes line-up had changed significantly over the past couple of seasons with the additions of Jordan Staal, Alex Semin and others. His shift down the depth chart impacted his production and he no longer looked like the guy who scored 30 goals just three seasons ago. That is about to change, as he joined the Penguins Wednesday and immediately slides into a very prominent role with the team. He’ll be a valuable fantasy player, at least while Sidney Crosby remains out of the lineup with a broken jaw. He spent his first game as a Penguins centering Pascal Dupuis and Chris Kunitz. He scored a goal, notched the shootout game winner, and won an impressive 87 percent of his faceoffs.

Marc-Andre Bergeron may not be among the best blueliners when it comes to play in his own zone, but he has long been an above average offensive player and now finds himself in Carolina, where he’ll get a chance to play on a power play with the likes of the Staal brothers, Alexander Semin and a host of other talented forwards. He has already picked up a PP assist, three shots on goal and is skating roughly 20 mins per night over two games since joining the team. Carolina’s power play ranks 27th in the league so they are really hoping that he will jump start them. Bergeron averaged .55 and .56 points per game in two of the past three years and should see his production stay in and around that rate in Carolina. Also worth nothing that he is one of the main options available on the team with Justin Faulk and Joni Pitkanen both dealing with injuries.

Clowe had zero goals when he showed up in New York, shocking for a guy who had scored 82 over the past four years. He has since picked up two goals and one assist and six shots on goal in two games with the Rangers and looks like he might be a major catalyst for their playoff push. He is skating on a line with Brad Richards and Mats Zuccarello gives his team another effective option that compliments the line of Derek Stepan, Rich Nash, and Ryan Callahan. Clowe isn’t afraid to drop the gloves, will get penalty minutes, and should be a producer down the stretch, so get him in your line-up as the fantasy playoffs get underway.

Bouwmeester leaves a pretty horrid situation in Calgary and immediately joins one of the better teams in the Western Conference. The Blues have actually been coveting J-Bouw for quite some time to skate alongside talented young d-man Alex Pietrangelo and that is precisely where they are using him. He is playing in all situations — the power play, penalty kill and five-on-five. Bouwmeester has picked up three assists since joining the team and looks like he will be very productive down the stretch, as he tries to help the team make the playoffs, something that he himself has never done in his career.

The Capitals pulled off one of the more shocking deals of the day when they acquired Martin Erat from the Predators for top prospect Filip Forsberg. Erat, who has always been a productive player, gets an immediate boost as he joins a team that features Alex Ovechkin, Nicklas Backstrom and Mike Ribiero. Erat is currently skating on the Capitals third line with former Preds teammate Joel Ward and talented youngster Mathieu Perreault. The reunion with Ward could play dividends, as the duo was a productive one in Nashville. Erat will also get time on the power play, where he’ll look to help the Capitals division title hopes.